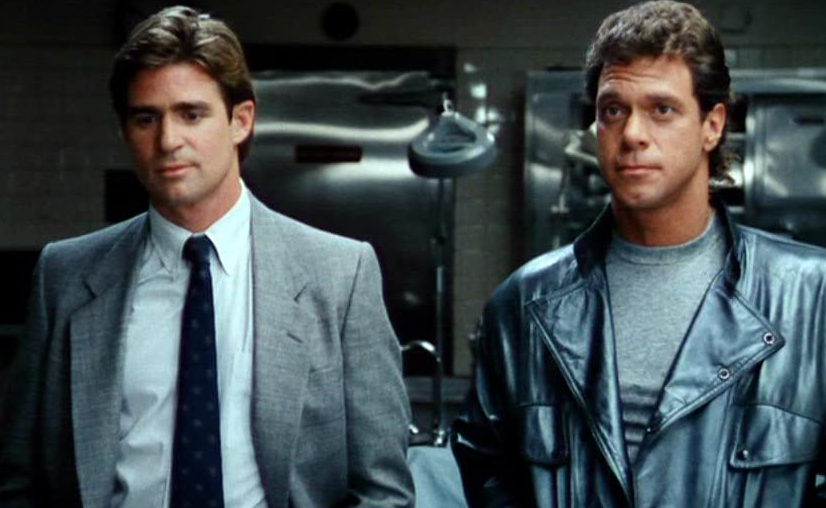 Plot: When a dutiful Los Angeles police officer named Roger Mortis (Treat Williams) tries to apprehend robbers that happen to be zombies, he ends up as one of the undead himself. Since Mortis has managed to stay in his right mind, he aids his loudmouthed partner, Doug Bigelow (Joe Piscopo), in getting to the bottom of the macabre crime ring. Eventually the cops track down the villains, including Arthur P. Loudermilk (Vincent Price), and try to end their supernatural thievery.

I feel like Dead Heat has become a cult classic over the years as I’ve seen other websites talk about it but then I realised we’ve never covered it so today is the day. Dead Heat stars Treat Williams and Joe Piscopo as two appealing wise-cracking cops investigating a string of bank robberies seemingly committed by men who can’t be killed. It doesn’t take long before Roger Mortis (Williams) ends up getting killed but a machine is discovered that can bring the dead back to life. Mortis (the Latin word for “death” trivia fans) is brought back to life as an undead cop so he and Bigelow (Piscopo) try to take down the bad guys once and for all.

Dead Heat is a strange beast that manages to successfully splice action, comedy and horror into one movie. The first half of the movie is very light in tone with some hilarious dialogue and a scene stealing turn from Joe Piscopo. It gets a little darker in the second half with various characters getting killed off which you may not see coming.

The script is still as sharp today and there is plenty of action with shoot-outs galore especially the opening robbery which is a highlight.

Williams and Piscopo are a fantastic buddy duo with great chemistry and they both look like they are just having a ball.

Any movie with Vincent Price in it is also worth seeing and although his role isn’t huge he is still as magnetic as always and perfectly cast.

Spoiler alert but I was reading on IMDB that writer Terry Black was approached by New World Pictures to write a sequel to Dead Heat. “Black told a New World executive that a sequel would be hard to do because all the main characters died at the end of the first film. The executive responded “you’ve got a resurrection machine… you figure it out.” The sequel however was never made. Which is too bad as I would have loved to see this hilarious duo return in some way.

It was only on this viewing that I recognized Keye Luke as Mr. Thule; he played Mr. Wing in the Gremlins movies and has a rather iconic voice. Mel Stewart gets a few minutes of being the shouty police Captain which was a necessary staple of any 80’s buddy movie.

Overall, Dead Heat is wonderfully silly fun with an entertaining script, a likeable lead duo and plenty of action making it a must-see.