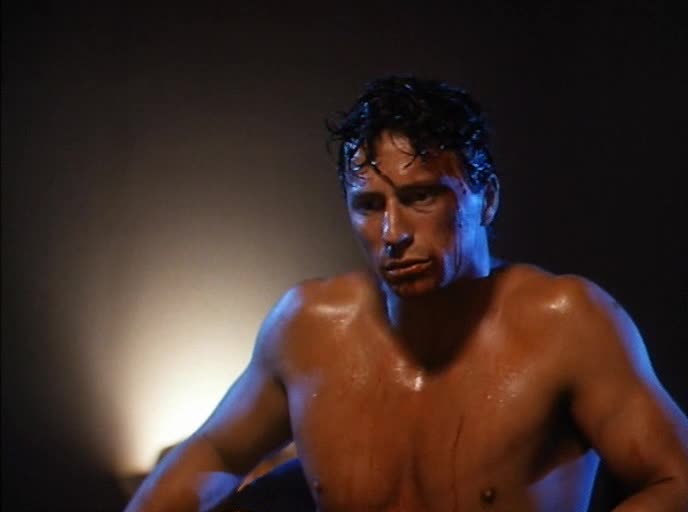 Plot: Jeff Wincott plays a gambler who puts his life on the line to buy his way out of the clutches of a mobster.

You know you are in for a quality movie when the director’s name is Richard W. Munchkin (and it’s produced by PM Entertainment) so Deadly Bet doesn’t disappoint; Munchkin is actually a bit of a gambling wizard (of Oz) and over the years became an expert on the subject so this movie was the perfect choice for him as a director.  I was reading on IMDB that he claimed that the script was initially only 47 pages long, whereas most other scripts at the time were between 90 and 110 pages. In his own words: “The last 40 minutes of that film was [one] line in the script – ‘He goes to a big tournament, and wins.’ That was it.”

Although there wasn’t a yellow brick road to be seen, the movie is hugely entertaining simply for the story and for Jeff Wincott’s performance as a gambling addicted loser who will literally bet his girlfriend (classy).

He’s actually a bit of an ass and difficult to root for at first but then at the 1 hour mark he has an epiphany in front of the mirror and decides to change his ways.

There’s no better way to get over a gambling and alcohol addiction than getting in a ring and kicking the shit out of other guys, which he promptly does especially when he’s being financed by the mob; so he’s not exactly an all round hero. That’s what makes it interesting though is that Wincott is one of the better actors of the action genre and his performance is genuinely good.

I don’t think I’ve seen another movie where so much baby oil has been used; everyone looks so shiny, especially the villain Rico played perfectly by Steven Vincent Leigh.

He’s one of the best kind of bad guys where he’s just so damn smug all the time; whenever he smiles you want to punch him in the face. He also seems to have more baby oil than Dwayne Johnson, Arnie and Sly combined. I’m surprised anyone can actually fight him without slipping out of the ring…

Interestingly enough I was reading on IMDB how Steven Vincent Leigh’s personal trainer for the film was a former European bodybuilding champion. Jeff Wincott, impressed by how muscular Leigh was getting and not wanting to be outdone, began working with the trainer as well. It became a competition between the two as to who could get in more impressive shape, and as a result, the two become noticeably more muscular throughout the film.

Deadly Bet is more of a character piece than all round action but I found myself really enjoying it and the final 20 minutes of fighting makes it worth a watch. When Rico finally gets his comeuppance the screeching electric guitar music kicks in and I was shouting at my TV screen with joy.

I didn’t particularly like Wincott’s girlfriend in it but we’re not really supposed to (I hope) and he’s better off without her.

The fight scenes were well executed and I was involved with every one; Gary Daniels makes a brief appearance (with long hair) in a fight scene at the start although he doesn’t actually say anything but it’s cool to see him in an early role. Keep your eyes open for Art Camacho who also turns up in a small role as a mugger.

Although I preferred Mission of Justice, Deadly Bet has an engaging story and surprisingly good performances with some great fight scenes. Wincott is always watchable and this was one of his better roles too so if you haven’t seen or heard of this movie I would recommend checking it out as it’s a little more unconventional than your average fight movie.