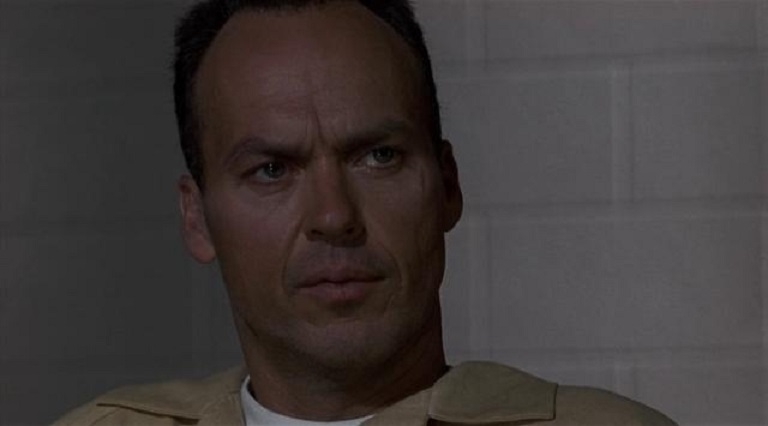 Plot: Frank Conner (Andy Garcia) is an honest police officer who desperately needs to save his son’s life. However, after losing all hope, he finds out that a criminal Peter McCabe (Michael Keaton) in jail is his only savior.

I hadn’t watched Desperate Measures since I saw it in the theatre way back in 1998; I remember at the time it got generally poor reviews and wasn’t even a hit at the box office making only $13.8 Million on a $50 million budget.

I forgot what a total riot this movie was; sure, it is preposterous stuff but it’s an action movie! They’re meant to be!

Andy Garcia is one of my favourite actors and he is always so intense on screen; this is him at his most Garcia-ish but have you ever noticed the way he looks at his watch in movies? It’s always so theatrical where he practically punches the air extending his arm then looks at his watch. He did it in the Ocean’s films as well and now I can’t stop thinking about it. Anyway, poor Frank (Garcia) is at his wit’s end and will indeed go to desperate measures to save his son who is sick with leukemia. Garcia spends most of the movie being convincingly frantic and running after Pete McCabe (Keaton) who is equally as desperate… to escape prison.

As good as Garcia is though this is Michael Keaton’s show, chewing the scenery as convict Peter McCabe; the one man who is a compatible donor for Frank’s son Matthew. He has some great dialogue like “it’s great to be the king!”, “If I can’t eat it, drink it, fuck it or fire it, I ain’t interested!” and more. Keaton never phones in a performance and to this day Peter McCabe remains one of my favourite characters of his. He is essentially a criminal mastermind and always seems one step ahead of everyone but he knows Frank won’t kill him as he needs him alive, so he uses that to his advantage to try and escape.

Desperate Measure makes for a taut 95 minutes and I found myself on the edge of my seat wondering what crazy shit McCabe would do next. Even though he’s a killer you still kinda root for him anyway due to Keaton’s sheer charisma. Even Frank bonds with him and they have an almost interdependent relationship with each other.

In terms of action there are some awesome explosions, an epic climactic car chase and just sheer tension to keep you on your toes.

There is a great supporting cast including the always reliable Brian Cox, Marcia Gay Harden and Dexter’s Erik King (AKA James Doakes)… I was a little disappointed that he never said “Surprise muthafucka!” in this though.

Trevor Jones provides the score which is a little overly dramatic but awesome at the same time as it’s so exciting that nothing that happens on screen could ever live up to it. While watching it I thought “this must have been the guy that did the music to Dark City” as it sounded rather similar to it and it was. I really need to get out more…

Overall, Desperate Measures is such crazy fun that it’s hard not to just get swept up in it and enjoy the ride. Michael Keaton is at his best as Pete McCabe who will keep you glued until the end credits and the action is well done making this a movie that deserves more love.