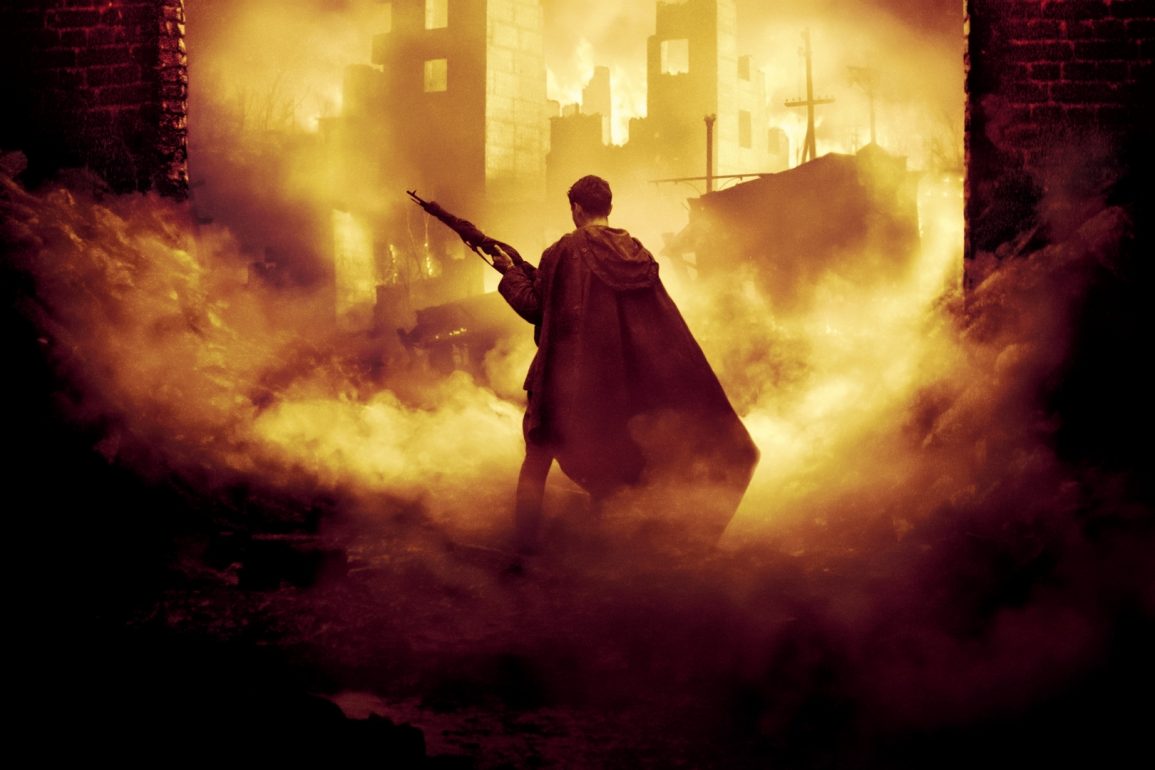 Plot: Vassili (Jude Law) is a young Russian sharpshooter who becomes a legend when a savvy polical officer (Joseph Fiennes) makes him the hero of his propaganda campaign. Their friendship is threatened when both men fall in love with a beautiful female soldier (Rachel Weisz). As the battle for the city rages, Vassili faces the ultimate challenge when the Nazi command dispatches its most elite marksman (Ed Harris) to hunt down and kill the man who has become the hope of all Russia.

Nobody ever talks about Enemy at the Gates which is a damn shame as it’s one of my absolute favourite movies and one of the best war films of recent years. I remember seeing it in theatres back in 2001 and being blown away at the time; it had been a few years since I watched it so I thought it was time for a revisit.

One of the big things to get used to for this movie is the fact everyone is speaking English; sort of like what they did with The Hunt for Red October where it feels like it has been translated so we aren’t worrying about anyone having wonky accents. The only person who seems a bit off is Ron Perlman’s accent but I’ve heard worse and his role is pretty small.

Despite being set in the battle of Stalingrad with two snipers in a deadly game of cat and mouse Enemy at the Gates is also a love triangle between Jude Law’s Vassili Zaitsev, Rachel Weisz’s Tania Chernova and Joseph Fiennes’ Commisar Danilov. Critics at the time said it wasn’t needed but I always liked that aspect as it gave a bit of depth to the characters and Tania was far from a damsel in distress; she was a soldier who wanted to fight for her country and the man that she loved.

The three leads are excellent and you feel sorry for Danilov who falls for Tania despite her being in love with Vassili and I think we can all empathize with that as at some point in our lives we all want someone we can’t have.

Enemy at the Gates has some harrowing battle scenes that capture the absolute Hell that is war but in this battle not only did you have to worry about the enemy but your own men would shoot you if you even thought about retreating or taking a step backwards. After Danilov witnesses Vassili’s skills with a rifle he speaks with Nikita Khrushchev (Bob Hoskins at his best) who agrees that rather than fear perhaps hope would be a better motivator to inspire the men to stop “shitting their pants”. Vassili becomes a folk hero inspiring a nation but the Germans are none to happy and send their best sniper Major Konig (Ed Harris) to take out the Russian once and for all.

I found Harris an odd casting choice but he makes the role work and you kind of take to him as he is charismatic; he does something towards the end however, which makes him out to be the monster he truly is and at that point you know he has to be killed.

The movie is 2 hours and 11 minutes long and rarely pauses for breath; the characters all get their moments to shine with some great dialogue but there is no shortage of action with several spectacular set-pieces. The visuals remain impressive and the scenes where the planes are bombing the city are incredibly intense.

James Horner’s score is one of his best even if it does contain his usual 4 notes which he had in the majority of his music. It has epic choirs and a memorable theme that will stick in your head after watching which is are in this day and age.

Overall, Enemy at the Gates is one of my favourite war movies that never lets up with some brutally effective battle scenes and a great cast who give their all.