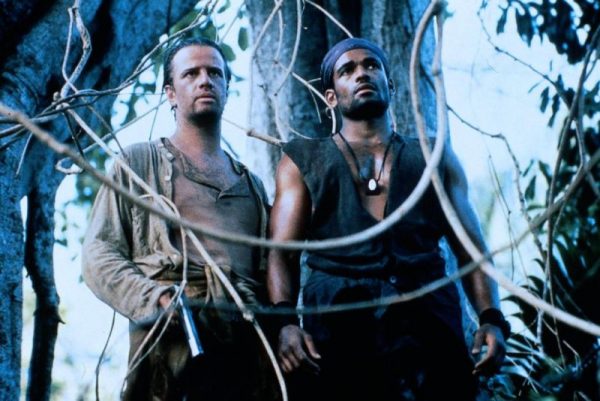 Plot: 400 million dollars are hidden in a boat in some harbor in South America, hidden by Dani Servigo’s brother. When his brother gets killed, Dani is a wanted man – by undercover DEA agent Cole Parker and also by Armor O’Malley, who is working for drug boss Loomis. Together, Servigo and Parker search for the boat.

I was obsessed with Gunmen when it first came out in 1993 an to this day it remains one of my favourite Christopher Lambert films. You may have notices I’m kind of going through a Lambert phase at the moment and this was helped by my good friend Jon Cross who recently sent me this movie brand new on VHS. It was still in its cellophane wrapper and everything. I watched the movie last night after not seeing it for several years and I’d forgotten just how much I love it.

The cast is fantastic and includes not only Christopher Lambert and Mario Van Peebles but Patrick Stewart and Denis Leary as the two main villains. Now, I’m not quite sure what accent Stewart was attempting but it was a little wonky and he ends up getting removed from the picture by Leary about half way through the film.

Leary is an absolute bastard in this movie; he just kills anyone for any reason and is hilariously over the top. What I’d forgotten about this movie was just how mean-spirited it is; no one is a nice person and everyone is out to try and find Dani Servigo’s (Lambert) brother’s boat which allegedly has $400 million cash which Dani’s late brother stole from Loomis (Stewart).

Mario Van Peebles’ Cole Parker is in the DEA and yet you never really take to him as for the entire movie he just is abusive towards Dani as he wants to find the money.

Lambert is perfect in this type of role; he can play the batshit crazy guy with his eyes closed and Dani is one of my favourite characters of his.

It has buddy banter galore and Dani/Cole even shoot each other in the legs and still manage to crack jokes.

It’s 90 minutes of constant action with gunfights galore and face punching every few minutes; sure there is no characterization whatsoever but it isn’t required.

Gunmen knows exactly what it is and just embraces the madness; it’s also the type of movie we just don’t get to see anymore and I still love it today. If you haven’t seen it then try to track it down and prepare to have a blast.