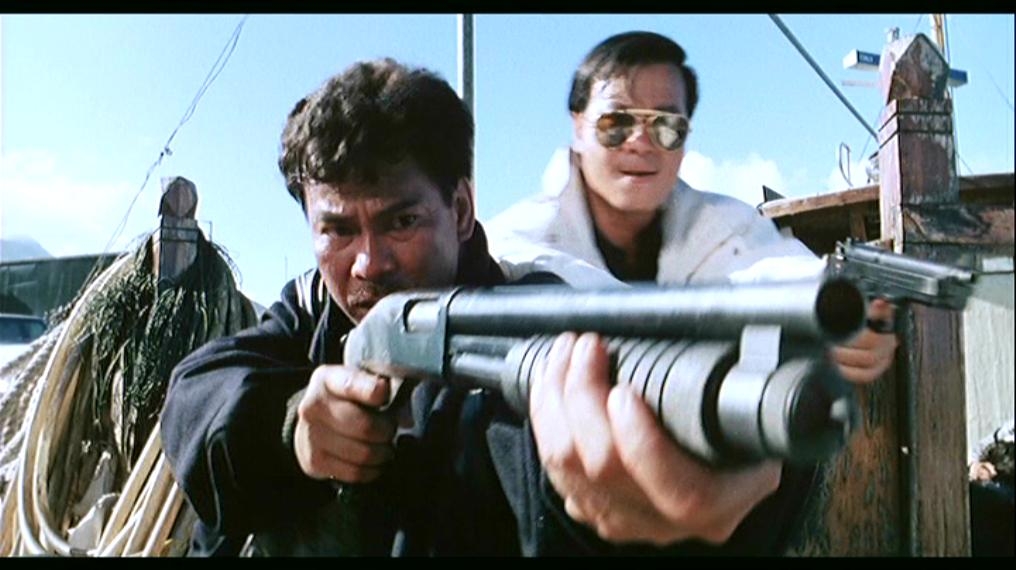 Plot: A respected and well liked gang-boss is betrayed and killed. One of his three adopted sons are to take his place. One of them is the traitor.

Just Heroes never gets mentioned in the same breath as John Woo’s seminal classics like Hard Boiled, A Better Tomorrow or The Killer but it’s still a kick-ass action flick with everything that makes John Woo’s films so awesome (even if it is co-directed by Wu Ma). We’ve got brotherhood, betrayals, stand-offs, double gunplay, explosions and even some slo-mo although admittedly not as much as he would be known for; there are also no pigeons or doves at this stage but the groundwork is there for the likes of Hard Boiled which would perfect his heroic bloodshed formula.

Just Heroes may lack the budget and set-pieces of Woo’s best work but there is still plenty to enjoy with a plot that has twists and turns that requires several viewings to truly appreciate it.

I never really understood why it was called Just Heroes as there is nobody particularly heroic in it as they are practically all criminals in some way but there is a sense of honour and when one of their own is murdered a group of gangsters try to find out who is the traitor in their midst.

Woo favourite Danny Lee is essentially the lead as Sou, the boss’s favourite but when the boss is murdered and Sou is left in charge the gang suspects Sou’s motives so everyone begins to distrust each other and we don’t know who to trust until the final reveal.

The bodycount is huge in this one with an endless supply of glorious squibs and even more bullets fired; nobody gets shot once in this movie. Why shoot someone once when you can waste an entire round?

Despite some of the sound effects being a little out of sync the action is slick with several notable shoot-outs and a blood-soaked finale that will satisfy any action fan. The characters all get time to breathe as we get to know them and we don’t find out who the real villain is until the final 20 minutes.

I didn’t know this until reading it on IMDB but the film was made to aid director Cheh Chang who was broke. When actors Danny Lee and David Chiang found out about Chang’s financial situation, they developed the story that was made to be similar to A Better Tomorrow (1986).

Speaking of A Better Tomorrow I do think the referencing of it towards the end was a little lame but it’s not a massive problem and didn’t detract from the entertainment value.

Overall, Just Heroes may not be a classic like Hard Boiled but it’s damn close with some impressive action scenes, unpredictable story and satisfyingly bloody finale. If you haven’t seen it then check it out when you can.