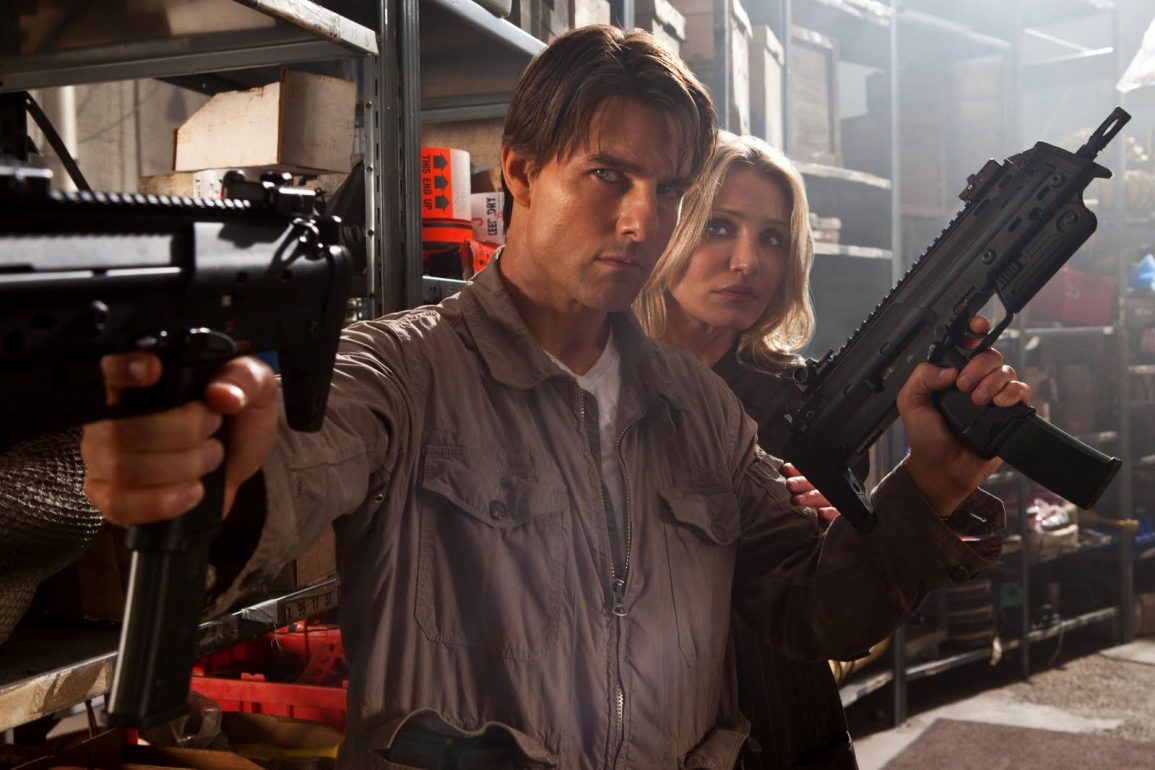 Plot: June Havens (Cameron Diaz) chats up her charming seatmate on a flight out of Kansas, but she doesn’t realize that she will soon land in the middle of an international adventure. The fellow passenger, Roy Miller (Tom Cruise), is a covert operative who claims he has been set up to take a fall. Now his reluctant partner, June must dodge bullets in Boston, leap rooftops in Austria and evade bulls in Spain, while she and Roy learn that trust is the most important survival skill.

I think like most people I had forgotten Knight and Day (still a lame title) starring Tom Cruise and Cameron Diaz existed. It was met with a lukewarm reception and wasn’t a big hit when it was first released back in 2010 and I rarely hear anyone talk about now. This was near the time of Tom Cruise jumping on couches, so he wasn’t as big a box office draw which I think put some viewers off.

I have a region free Blu-ray which features an extended cut of the film so after several years I revisited it over the weekend and I think this movie deserves more love.

I am specifically talking about the Extended Edition which just adds a little more to it. First off the opening is different with June (Cameron Diaz) introduced looking into a car in a junkyard and a guy comes over saying he wants to go home now, she responds “I’ll be out of your hair in a minute. I got a flight to catch”. Then it cuts to the airport which is where the film opens in the theatrical cut. This just adds a nice little character moment for Diaz showing that she is good with her hands and quite capable of taking care of herself so her arc in the film is more believable.

The plane fight (which for me is the film’s action highlight) is a little longer with a goon being knocked out on his seat and Roy (Cruise) knocks out the stewardess too.

There are a few extra character beats like extra lines of dialogue between June and Rodney as well as an extra scene where June delivers the carburetor and checks in on the GTO which she plans on giving to her sister as a wedding gift.

The car chase through the city is longer with some extra dialogue and different angles. As always Cruise likes to do his own stunts and he does some impressive ones here especially jumping from moving cars once again proving that he is one of the most devoted actors working in the action genre today. Until I watched the behind the scenes features on this disc I had no idea that Diaz was a trained stunt driver so she also did a lot of her own stunts too.

The sequence on the train where June faces off against an assassin is a little different in this cut with alternate dialogue.

As I hadn’t watched this movie for several years, I had forgotten that Gal Gadot is in this; she played Naomi, working on behalf of Antonio (Jordi Mollà) and although it’s just one scene it’s nice to see her and Cruise share the screen together. The scene is a little longer in this cut too.

The wedding sequence is extended and adds more depth to the relationship between June and her sister (Maggie Grace) so we now have a moving speech whereas in the theatrical June basically just waves at Rodney.

The climactic chase involving the bulls is longer in this version with more footage; interestingly I thought this was done using CG when I first saw it but the bulls are actually real making this an even more impressive action sequence. There is still a little too much greenscreen in this movie though which does take you out of a couple of moments.

When I first saw Knight and Day I found June to be rather annoying with her constant screaming but she has a genuine arc which flows better in this version; she starts out terrified and lacking confidence in herself but by the end she is saving Roy and even riding motorcycles while firing two guns.

It’s still a bit creepy that Roy keeps drugging June to knock her out during stressful situations, but she ends up doing the same to him in the end.

Directed by James Mangold Knight and Day may be his most action-packed picture to date; it is well paced, and the film has only one goal, to entertain and that’s exactly what it does. The tone is light, and the script gives us a few laughs; some of the jokes don’t always land but I still found myself enjoying the ride.

The MacGuffin of this movie is the zephyr which is a battery created by Simon Feck (Paul Dano) that could power cities so naturally everyone wants it as it’s worth a lot of money.

On villain duties is the always reliable Peter Sarsgaard as the corrupt agent Fitzgerald who has set up Roy; I don’t think I could ever believe him playing a good guy as he just has that intimidating presence on screen. Jordi Mollà may not have a big role but he still is a welcome addition as the frustrated Antonio who just wants the zephyr but it is consistently just out of his grasp.

I’ve always felt that if this film was released in the 80’s it would have starred Kurt Russell and Goldie Hawn in the lead roles as this has an old-school caper feel and Diaz’s character specifically reminded me of Hawn in movies like Bird on a Wire.

It’s derivative stuff and wouldn’t win points for originality but there are some really fun set-pieces in it from the awesome plane fight where Cruise uses everything at his disposal to fight off his opponents but we also get some spectacular car chases as well as a rooftop chase and the climax featuring real bulls ups the ante nicely.

Knight and Day got a Bollywood remake back in 2014 called Bang Bang! which I haven’t seen yet but the trailer looks crazy so I think I’ll check it out.

Overall, the extended cut of Knight and Day is superior to the theatrical version just giving a little more characterization to June and we get a few extra moments of action which is always welcome. There are some impressive sequences and Cruise and Diaz have good chemistry together making for a fun duo so it’s worth reevaluating.

If you’re interested you can buy the Extended Edition from Amazon.co.uk and it’s region free so it should work wherever you are.