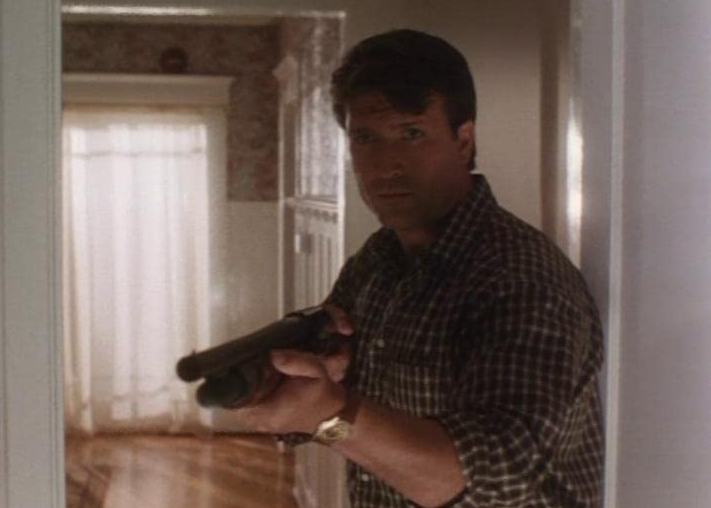 Plot: Idealistic Frank Jennings (Jeff Speakman) is working for the campaign of charismatic Aidan Carvell (William Shatner), who is running for the U.S. Senate in California. When Jennings discovers his candidate is actually part of a radical paramilitary organization bent on armed insurrection, he talks to the FBI, which promises to protect him and his family. Carvell, angered at the betrayal, orders his militia members to eliminate his former aide, who turns out to be an expert martial artist.

No one ever talks about Land of the Free starring Jeff Speakman and William Shatner, but it definitely deserves more love and I personally think it’s one of my favourite Speakman movies.

It’s a story that is still relevant today due to some of the politics involved (which I won’t go into here) but more importantly it’s still a cracking action movie with some awesome set-pieces; a highlight being a highway car chase involving a school bus. When you see the PM Entertainment logo at the start of a movie you can be sure to expect epic vehicular carnage and Land of the Free doesn’t disappoint. It’s the type of action movie we simply don’t see anymore due to all the practical effects and stuntwork which is why it will always have a place in my heart.

It’s just a load of fun and manages to pack in a lot of action in its 96-minute runtime. Speakman has several hand-to-hand fight scenes which are all thoroughly satisfying and there are some impressive explosions too.

Speakman is as sympathetic as ever as he tries to keep his wife and son safe from Carvell’s goons and Shatner makes for a suitably hateful antagonist but hardly a believable physical threat. I like how Cavill says to Jennings that he doesn’t have the balls to kill him in cold blood… but he’s dead wrong.

I thought Charles Robinson was particularly nasty and had a great presence as Carvell’s main henchman Matt McCaster.

The music is a bit cheap and keyboardy sounding but that is a part of the charm only adding to the enjoyment factor.

Overall, Land of the Free is action-packed with some awesome stunts and how can you go wrong having the Shat as your villain? Jeff Speakman kicks a righteous amount of ass and the bus chase still stands up as one of the many highlights.

As an added bonus I found the Kill Count courtesy of Satanclaus1 and in the movie Jeff kills 12 bad guys. Nice!