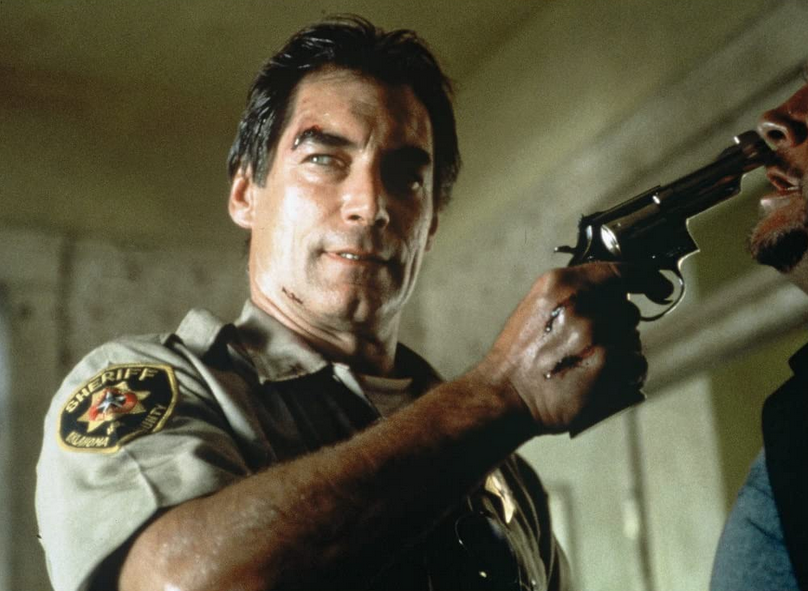 Plot: Bill “The Mouth” Manucci (James Belushi), a mobster-turned-FBI informant, has entered the witness protection program and relocated to the country. He’s sitting on $12 million stolen from the mob, but that doesn’t mean he’s left criminal life behind completely. Bill already owes money to the owner of a secluded crystal meth lab, and things get more complicated when thugs sent by the “Skipper,” the man Bill betrayed, come to retrieve the $12 million — and to ice Bill for being a snitch.

I feel like not enough people know about Made Men but any film that has Timothy Dalton playing a redneck sheriff in it is immediately worth watching as far as I’m concerned. This is Dalton as we’ve never seen him before where he’s barely recognizable as the corrupt cop Dex Drier (amazing name); he does a decent accent as well making for a wonderfully slimy villain.

James Belushi is so perfectly cast as the motormouth Bill Manucci who shit-talks everyone he comes across and he will literally die before he tells anyone where the $12 million dollars he stole is.

There are several twists to the story and although it may get a little confusing it constantly keeps you guessing about everyone’s motivations, moving at a brisk pace and running only 82 minutes.

The script from Robert Franke, Alfred Gough and Miles Millar is sharp and at times hilarious; I wonder how much of Belushi’s dialogue was improvised.

The supporting cast includes Michael Beach and Steve Railsback and we get solid performances all round.

Made Men is packed with action including impressive shoot-outs (some nice double gunplay too), chases and explosions but that shouldn’t come as a surprise considering it’s produced by Richard Donner and Joel Silver.

Overall, Made Men deserves more love as it’s a tight little action comedy with some choice dialogue, impressive gunplay and regular explosions; Timothy Dalton is a revelation and James Belushi has all the best lines making this worth checking out if you enjoy these types capers.