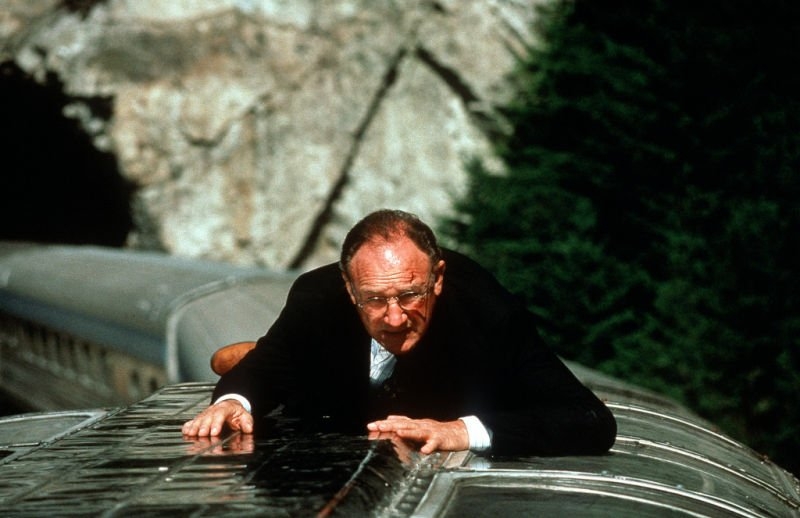 Plot: When Carol Hunnicut (Anne Archer) witnesses a brutal murder by mobsters, she decides to hide in a remote cabin in the Canadian tundra. Clued to her whereabouts, Los Angeles District Attorney Robert Caulfield (Gene Hackman) journeys into the wilderness to convince Hunnicut to testify in court. Reluctant at first, Hunnicut agrees when the cabin is shot at by mob hit men in a helicopter. From there, it’s a mad dash through the wilderness to escape the mob.

Peter Hyams is one of my favourite directors having helmed movies like Outland, Sudden Death, Timecop and End of Days.

Narrow Margin isn’t talked about as much as some of his others but it’s a cracking action thriller with Gene Hackman on fine form as an assistant DA trying to protect a murder witness (Anne Archer) from assassins on a train.

At 96 minutes it’s tightly paced with some superlative action scenes and stunt work; the finale on top of the train is perfectly executed and the fact that it all looks like it was done for real just makes it even more impressive.

The script is sharp with some nice dialogue and one-liners like “I only drink when I’m on duty”; Hackman never disappoints and is one of the greatest actors of all-time but Narrow Margin also has an impressive supporting cast that includes Anne Archer, M. Emmett Walsh, J.T. Walsh and Harris Yulin.

I was reading on IMDb that “Peter Hyams was searching through old movie classics that might be good to remake but only ones which were not too well-known and significant. In the end, Hyams chose Richard Fleischer’s The Narrow Margin (1952).” I haven’t seen the original but it would be interesting to compare them both at some point in the future.

It’s funny I was watching Witness starring Harrison Ford at the weekend and I realised that both movies had very similar stories with a cop protecting a witness who saw a murder take place. So it’s not exactly the most original concept ever but what is?

Overall, Narrow Margin is a classy action thriller with fantastic performances, impressive set-pieces and stunts that keeps you engaged until the end. If you haven’t seen it it’s worth seeking out.