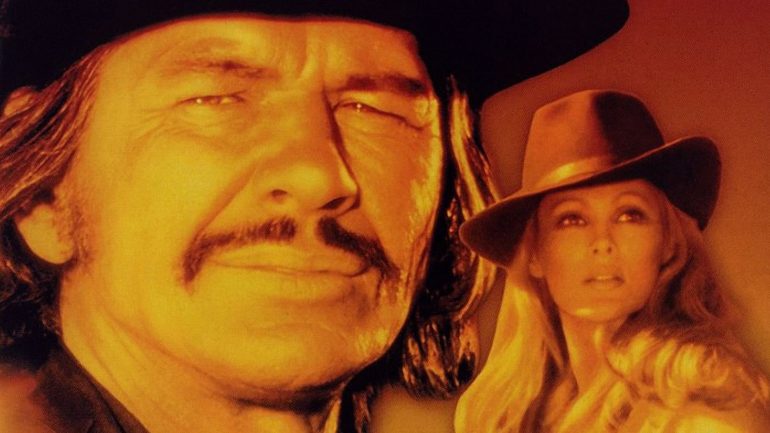 Plot: A train carrying a Japanese delegation with a ceremonial sword for President Grant is robbed by bandits led by Link (Charles Bronson) and Gauche (Alain Delon). When Gauche double-crosses him and leaves him for dead, Link is ordered to team up with Kuroda Jubei (Toshirô Mifune), one of the ambassador‘s guards, who has a week to recover the sword or commit suicide. Hoping to find out from Gauche where the gang buried their spoils before Kuroda can kill him, Link tries to escape from the samurai.

Red Sun is one of Charles Bronson’s best pictures and a bit of an underrated gem in my book. Bronson plays robber and general scoundrel Link Stuart who reluctantly teams up with a Samurai called Kuroda Jubie (Toshirô Mifune) after his friend Gotch ‘Gauche’ Kink (Alain Delon) double crosses him and leaves him for dead.

Cultures inevitably clash in what was touted as the first East meets West picture; I have to admit the idea of Cowboys and Samurai is an awesome one and this movie really delivers the goods. One of the things which really surprised me about it was the amount of humour; it’s almost a buddy movie with some rather hilarious banter throughout, mostly from Bronson. Link is a selfish ass and yet also unwaveringly cool never getting flustered even when all the odds are stacked against him. He’s basically the funny one with Toshirô Mifune playing the straight man with a strict code of honour.

Mifune is at his magnetic best as Jubie who wants to do this one last task as he sees the time of the samurai coming to an end as technology takes over and Japanese culture moves on from the world he knows and understands.

I was reading that apparently Mifune “entertained the cast and crew throughout the entire production with his refined culinary skills, bringing over a supply of Japanese meats, watercress, seaweed, and other ingredients. He would also exchange recipes for French and Italian dishes, including spaghetti”.

As we all know Mifune starred in Seven Samurai and Bronson starred in The Magnificent Seven so it was an interesting idea to cast them both alongside each other.

The movie has plenty of action with shoot-outs, swordfights, punch ups and a bloody finale with some Comanches; the story is also quite unpredictable with several twists and turns happening that you may not see coming.

Ursula Andress stars as Gauche’s love interest Cristina who is feisty and strong mostly hurling abuse at Link so you aren’t exactly rooting for her because of her loyalty to the villain.

Speaking of which, Alain Delon was fantastic as Gauche; he’s charismatic yet merciless, killing anyone in his path and will die before he gives up the location of the money he stole from Link.

The music is classic Western stuff and admittedly a little dated now but I still enjoyed it; the theme tune will go through your head for hours after watching it.

Red Sun is directed by Terence Young who you’ll remember because he directed two of the best James Bond films Dr. No and From Russia with Love. I always considered him an underrated director and this movie only proves my point.

Overall, Red Sun is action-packed, loaded with humour and memorable characters and I still consider it to be essential for any action fan. Bronson and Mifune are on sparkling form so if you can find it then just go right ahead and buy it, you won’t be disappointed.