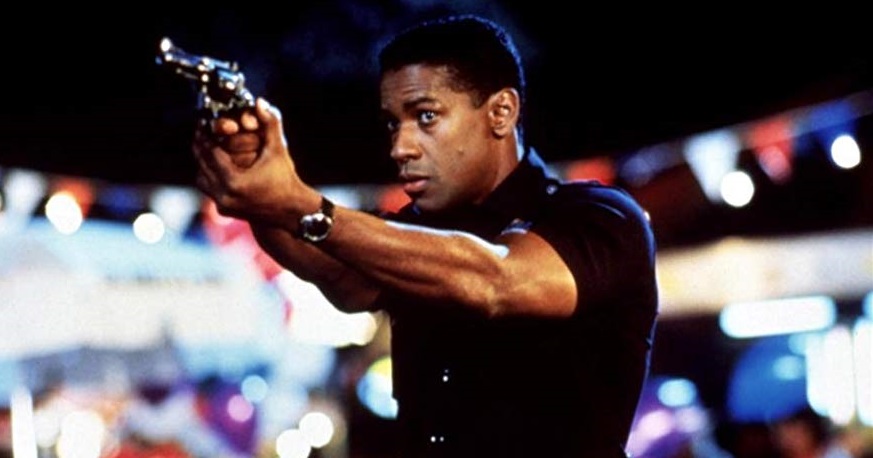 Plot: After tracking down and arresting Earl Talbot Blake (John Lithgow), a psychotic hit man, rookie Los Angeles police officer Nick Styles (Denzel Washington) is hailed as a hero. Several years later, Styles’ life appears perfect: He has married his girlfriend, started a family and risen to the position of assistant district attorney. However, his world is turned upside down when Blake escapes from prison with plans to exact brutal and well-calculated revenge.

I hadn’t watched Ricochet for many years and forgot how totally awesome it is; as with most movies I watch these days I recently picked it up on VHS and have to admit it’s one of the worst VHS’s I’ve ever seen. The aspect ratio kept changing every few seconds so you could barely see people’s faces but got great views of their chins or eyebrows. It seemed to correct itself though and didn’t take away from the entertainment value. If a Blu-ray exists then I need to pick it up.

I love Denzel Washington; he has never been afraid to do action pictures while also doing Oscar-bait movies making him one of the most watchable and diverse actors in Hollywood.

Ricochet is one of my favourite movies of his as he is really put through the ringer by a criminal called Earl Talbot Blake played to perfection by John Lithgow who always manages to be menacing even when playing a good guy. He has zero redeeming qualities in this movie and wants Denzel’s new DA Nick Styles to pay for putting him away in prison just at the start of his “career”.

Blake escapes from prison and he begins the game of ruining Nick’s life; any time Lithgow is on screen violence is never far off and it’s the type of movie where you’ll want to have a shower afterwards. It’s pretty sleazy; at one point Nick essentially gets drugged then raped so Blake can videotape him and set him up.

Nick’s transformation from respected citizen to pariah due to Blake’s evil scheme is brilliant as is his subsequent redemption with Denzel proving from a young age what a brilliant actor he can be.

Ice-T plays childhood friend turned criminal Odessa who sees the bind Nick is in and helps out as they concoct a plan to take out Blake for good.

Alan Silvestri provides an action packed music score even if it does sound identical to his Predator soundtrack; he has an immediately recognizable style which I have always been a big fan of.

There is some great action in this movie and I think the highlight is a prison sword fight between John Lithgow and Jesse Ventura where you think Blake will show some mercy but he most certainly doesn’t proving that he is a complete maniac who only looks out for himself.

The film’s climax is awesome but also ridiculously over the top which is why it’s so amazing. Blake has one of the best bad guy death’s of all time so spoiler alert if you haven’t seen it before. He and Nick are fighting on top of a tower and the tower is electrocuted (don’t ask how) making Blake fall so then he gets impaled through some random spiky thing which is really just there for him to be impaled on. Absolute genius. Then to top it off Nick says… “Now you get the point!” YESS!! We need one liners like that back in action cinema.

The very end with Nick talking to the reporter is cheesy as Hell and my least favourite aspect of the movie but aside from that Ricochet remains a ridiculously entertaining action thriller with Denzel on fine form and John Lithgow stealing every moment as the villain.