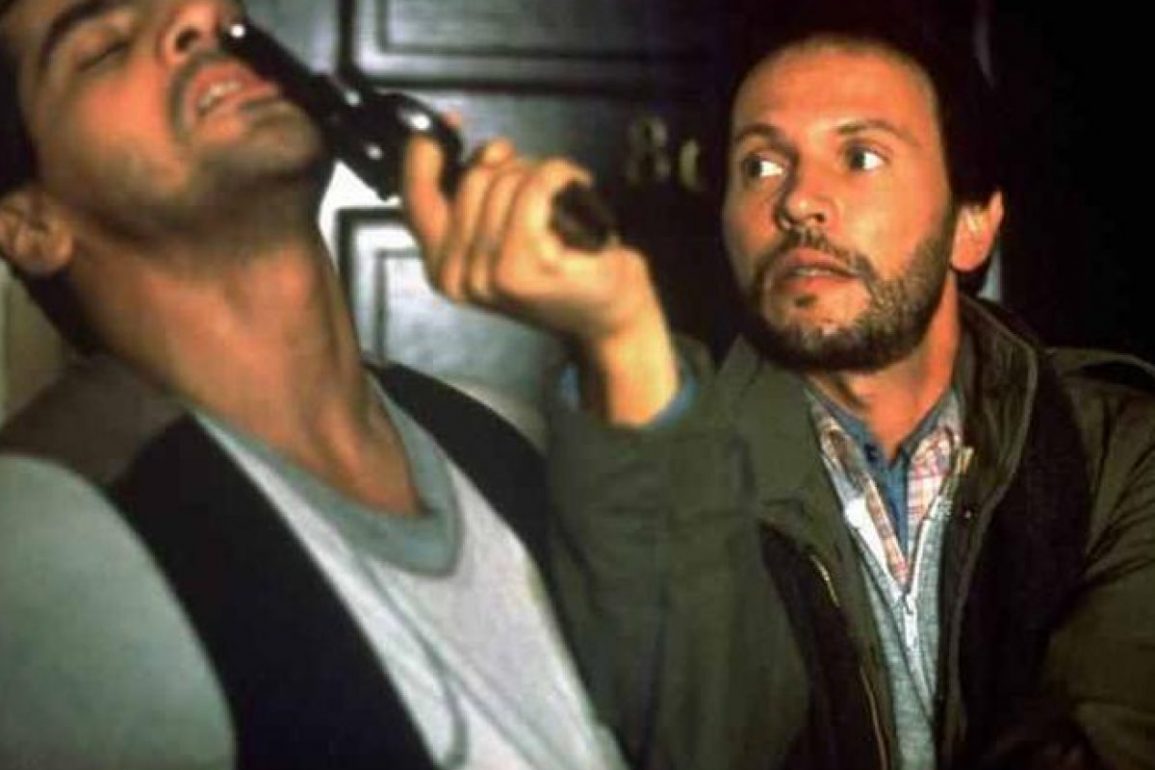 Plot: Ray and Danny (Gregory Hines, Billy Crystal) are two Chicago police detectives hot on the trail of drug kingpin Julio Gonzales (Jimmy Smits). They manage to nab the drug lord, but the bust is messy, and the two are suspended. While vacationing in Key West, Fla., they decide to retire from the police force and open up a bar. But when they return to Chicago and find out that Gonzales has been released on bail, they vow not to quit the force until the dangerous dealer is behind bars for good.

When people talk about some of the better buddy cop movies of the 80’s few ever mention Running Scared starring Billy Crystal and Gregory Hines which is a shame as it’s a lot of fun with a generally light tone. Crystal and Hines make for an appealing duo trading witty banter while trying to take down rising drug kingpin Julio Gonzales (Jimmy Smits).

There aren’t that many action scenes in the first half, but we do get a few shoot-outs and chases with a bullet-riddled finale; it’s mostly the script which entertains with several laugh out loud moments and Hines proving every bit as adept with comic timing as Crystal.

Running Scared is formulaic stuff and there is little original about it that really stands out but it’s the sheer likability of our leads coupled with the sparkling dialogue that makes the movie such fun.

Peter Hyams doesn’t get enough credit as a director despite having made some quality action pictures over the years like Outland, Sudden Death, Narrow Margin, The Presidio and Timecop to name a few. He knows how to shoot an action scene and what set-pieces we get here are well done. Originally this film was written for Gene Hackman and Paul Newman as it was going to be about two older cops looking to retire away from New York, but it was Hyams who suggested making the cops younger and the studio agreed.

Running Scared is an easy watch that’s never boring; Jimmy Smits makes for an effective villain and it has a great supporting cast including Joe Pantoliano, Jon Gries and Steven Bauer.

I was always surprised this never got a sequel but apparently a follow-up titled “Still Running” was planned and different scripts were written however, both Crystal and Hines didn’t think any of them were good enough to warrant a sequel and turned them all down. Too bad as I would have enjoyed seeing more of these two on screen together.

There are some fantastic 80’s tunes and Michael McDonald’s “Sweet Freedom” was a big hit because of Running Scared; both actors showed up in the music video which was a sort of spin-off. According to IMDb “Ray and Danny are in their squad car looking at a postcard from ‘McDonald’ in Florida which says ‘Wish You Were Here’ (implying that was the inspiration for them choosing that as their holiday destination). We then see a montage of action scenes from the film over the song’s intro, followed by Michael McDonald singing the song at his keyboard in a Florida bar. At the song’s climax, Ray and Danny join up with him and have some beers, and then dance along to and join in the song’s backing vocals as it draws to a close”. It’s very much an idea of the time period and comes across as somewhat corny today but that’s a part of the appeal.

Overall, Running Scared deserves more love as it’s a fun buddy cop movie with our leads coming across as immediately appealing, the script is still funny and we get some decent action scenes in the second half making this well worth revisiting.