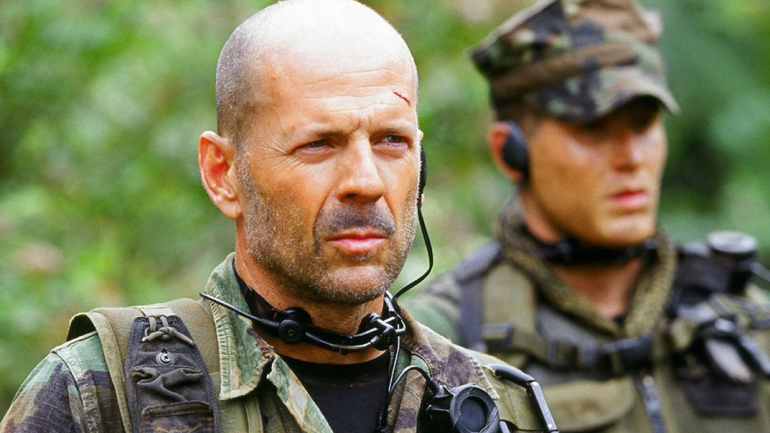 Plot: Bruce Willis stars as Lt. A.K. Waters, a tough Navy SEAL veteran who is assigned to enter the heart of war-torn Africa on a dangerous mission to rescue Dr. Lena Hendricks, a U.S citizen. Waters and his men find Kendricks, but she refuses to leave with them unless she can bring along 70 refugees who have been left to her care, forcing Waters to choose between completing his task or saving innocent lives.

Tears of the Sun was generally met with lukewarm to poor reviews from critics when it was released in 2003 as it’s sitting at 33% on Rotten Tomatoes. It is admittedly a relentlessly grim movie with little in the way of levity but the performances are first rate and I particularly thought Bruce Willis played the stoic Lieutenant A.K. Waters well. He’s a tough Navy SEAL who is used to following orders and completing his mission but despite being given strict instructions to bring Dr. Lena Hendricks (Monica Bellucci) to safety his conscience begins to surface, and he can’t leave a group of helpless refugees to die.

Hendricks isn’t especially sympathetic at first coming off as stubborn but she is just trying to protect the people from being left behind as she knows they will be slaughtered by the rebels.

The supporting cast is impressive including Cole Hauser, Johnny Messner, Tom Skerritt (who always shines in these military roles), Nick Chinlund and Eamonn Walker. Mostly all they need to do is look tough and then shocked when they discover various atrocities committed by the rebels but there are times when you don’t need lots of dialogue.

The final 20 minutes are packed with action featuring a brutal shoot-out and planes dropping bombs so it isn’t short on spectacle. I remember one review when this movie came out stated the ending was “offensively optimistic” but I feel it was necessary as the rest of the movie is rather gruelling.

Hans Zimmer’s score is perfect with the expected African chants and some Lise Gerard thrown in for good measure so it all works for the movie even if it does feel like some leftovers from The Lion King.

Directed by Antoine Fuqua this is another movie that shows how talented he is when he is shooting action scenes with real explosions and the film generally looks fantastic with a lot of it taking place at night or in the rain which adds to the oppressive atmosphere.

The film is tense from the start and I find myself glued to the screen right up until the end credits. It’s not a movie I watch that often due to the dreary subject matter and it isn’t exactly feelgood fare but I feel Tears of the Sun deserves more love.

Overall, Tears of the Sun can be a tough watch at times and isn’t exactly cheery viewing but Bruce Willis was well cast as the stoic Waters and the supporting cast give their all; it may not be a movie you want to watch all that often but it is relentlessly tense and the final half hour is action packed.