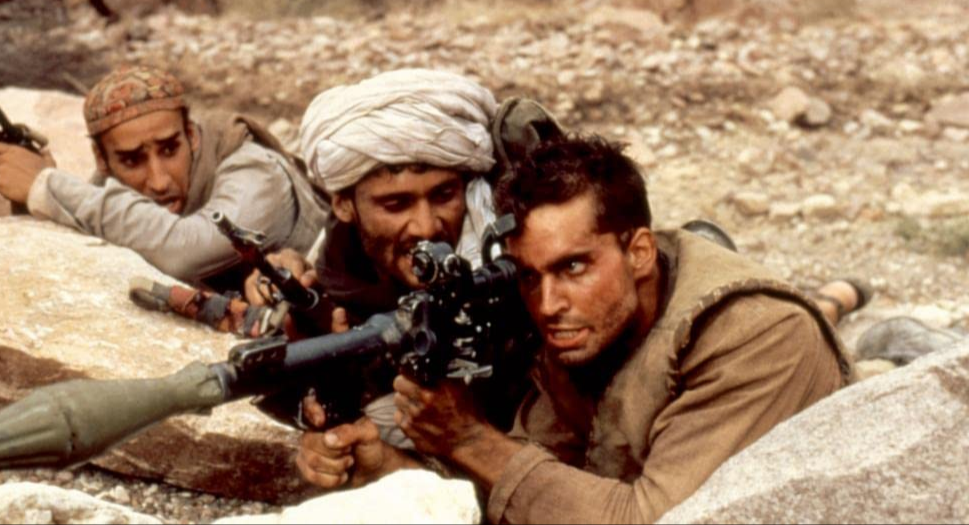 Plot: A Soviet tank and its warring crew become separated from their patrol and lost in an Afghan valley with a group of vengeance-seeking rebels on their tracks.

I had never heard of The Beast until just before Christmas when I got an email from a fan called Nick who recommended it.

Released in 1988 The Beast (or The Beast of War as it’s also known) is a film that deserves to be on your radar. It was apparently only released in two screens across the whole of the U.S. by Columbia Pictures and then disappeared with little fanfare.

It stars George Dzundza (in his best role to date), Jason Patric, Stephen Baldwin, Don Harvey and Erick Avari as a group of Russians lost in a tank in Afghanistan during the Russian Afghan war.

You’ll notice that these are American actors playing Russians but don’t let that put you off; I just consider it that they’ve been translated into English and if you can let that go then you’ll be fine.

The Beast wastes no time in getting going with some incredible battle sequences and harrowing scenes of violence so be warned this isn’t exactly a “fun” tale.

George Dzundza plays Daskal, the leader of the tank group and he is a man who is going full-on Kurtz on us. He has essentially lost his mind and is paranoid even with his own men. When he orders Konstantin Koverchenko (Jason Patric) to run over one of the Afghan’s with the tank it’s one of the most disturbing moments I’ve ever seen. This really shows the horrors of war and what it can do the men’s minds as they all struggle to cope with their situation.

Jason Patric makes Konstantin Koverchenko relatively sympathetic but even then you couldn’t help but think he should have stood up to Daskal sooner. Stephen Baldwin’s Anthony Golikov is terrified for the majority of the movie and is a coward who also refuses to stand his ground but he is in an impossible situation knowing that Daskal could snap and kill him at any time.

Erick Avari is the one pure hearted character called Samad who only wants Daskal to respect him but it ends in horrifying tragedy.

Steven Bauer plays Taj who vows revenge on the Russians who attacked his village and after he finds out his relative was killed he has become the new Khan leading his men after the Soviets. He is my favourite character of the entire picture as he is filled with self doubt and never loses his humanity no matter what.

There is a battle scene every few minutes but you’re not really cheering it on as this movie challenges you making the violence visceral and shocking as it should be.  The characters are complex and unpredictable making The Beast quite unlike anything I had seen before; I can take or leave war movies a lot of the time but this is one of the best I’ve seen for some time.

One thing you should take away from this movie is to never wrong an Afghan woman as they will show no mercy to you.

Mark Isham’s score still holds up really adding to the rising tension and is one of the many highlights of this film.

Overall, The Beast is harrowing yet gripping with George Dzunda giving a fierce and unforgettable performance; it has impressive battle scenes and a relentless pace making this a must see.