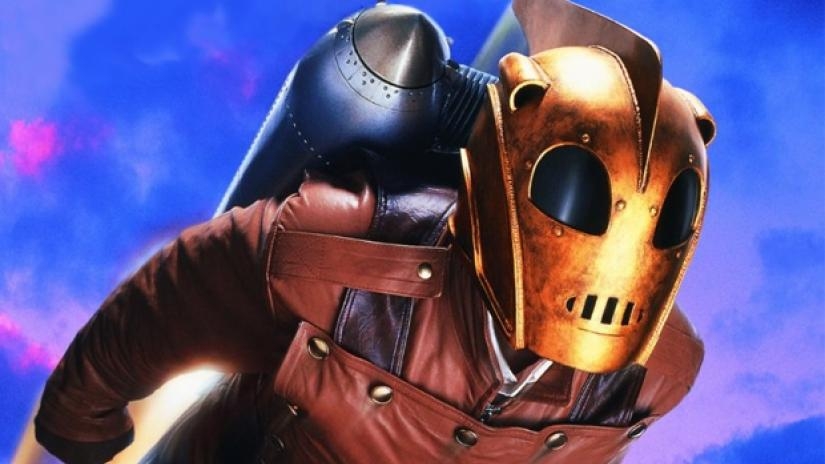 Plot: Straight from the pages of a pulp comic from a past era, the Rocketeer recreates 1930’s Hollywood, complete with gangsters, Nazi spies, and the growth of the Age of Aviation. Young pilot Cliff Secord stumbles on a top secret rocket-pack and with the help of his mechanic/mentor, Peevy, he attempts to save his girl and stop the Nazis as The Rocketeer.

I’ve seen several movie sites talk about The Rocketeer over the past few years and I realized we’ve never covered it so now it’s my turn.

I hadn’t watched The Rocketeer since I saw it in the theatre way back in 1991; it is on Disney+ so the other day I thought it was time to revisit it and I forgot what a blast the film is. Set in the 30’s The Rocketeer wasn’t a big box office hit at the time mostly due to some pacing issues but also there are a lot of references to the golden age of Hollywood that younger audiences wouldn’t get. I know I had no clue who Howard Hughes was but I was 13 years old so give me a break!

This is the kind of movie they genuinely don’t make any more although apparently Jon Favreau is still a fan due to the reference in The Mandalorian (where the guy in the jetpack salutes Mando).

The Rocketeer has a sense of wonder from a more magical time in movies where it feels like a Spielberg movie but that’s due to the director being Joe Johnston who worked on several episodes of The Young Indiana Jones Chronicles so he learned from the master (and would later go on to direct Jurassic Park III).

I think the highlight of the movie is James Horner’s soaring musical score which is wonderfully heroic and whimsical transporting you away to another world for a few hours.

Billy Campbell made Cliff Secord a sympathetic protagonist (if a little bland) and despite what some may think he has actually had a steady career since this movie. Jennifer Connolly has rarely been more gorgeous than she was in this and if I remember correctly she was one of my very first crushes.

Timothy Dalton hams it up to perfection as the villainous Nazi spy masquerading as a Hollywood actor called Neville Sinclair who has his sights set on the jetpack that has come into Cliff’s possession.  His “I do my own stunts” is my favourite line from the movie and he is so wonderfully slimy that you just hate him… but love him at the same time as he’s Timothy Dalton who I think is great.

Although it takes a little while for things to get going the second half of the movie is packed with thrills and some spectacular action especially the explosive finale which is thoroughly satisfying. Obviously now some of the effects don’t hold up so well but this was nearly 30 years ago and the fact that the movie remains every bit as watchable now is a testament to its quality.

The art deco poster for the movie was always so eye catching, and I think I want a framed version in my apartment. 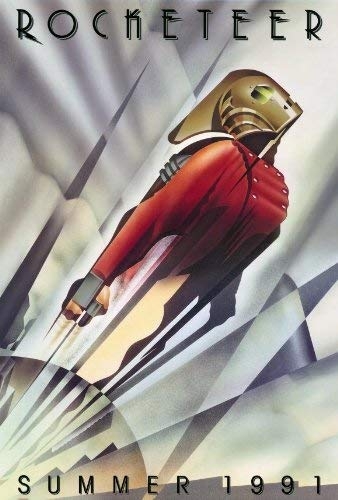 It feels like it would be a perfect double bill with Dick Tracy as this has similar larger than life characters like the henchman Lothar (played by Tiny Ron) as well as gangsters and people who call women “dames” a lot… I’m going to do that at work and see if I can get fired.

Overall, The Rocketeer is an old-fashioned movie that feels like it came straight out of a comic book or serial from the 30’s. It is wonderfully harmless fun that has some great action scenes and a sense of wonder we rarely see these days.