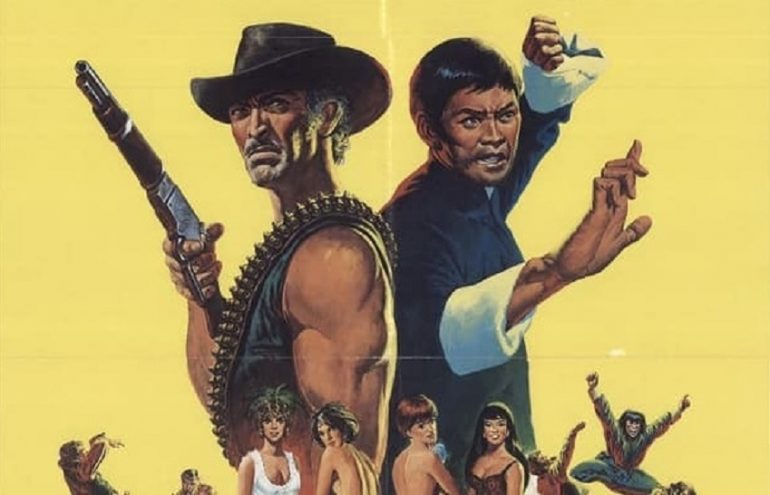 Underrated Gem: The Stranger and the Gunfighter (1974)

I need to give a shout out to Michael Long who posted about this Spaghetti Western in the Action Elite Facebook group recently; admittedly I had never seen it and little did I know that I had been missing out on a movie with the greatest story of all time.

Wang Ho Chien (Lo Lieh) is sent by a Warlord to America to help recover his investment that his uncle was in charge of. He arrives in the US and meets up with a gunslinger thief by the name of Dakota (Lee Van Cleef) to help him on his quest.

What this synopsis doesn’t say is that his uncle had pieces of a map to his fortune… tattooed on the asses of various women around America. So the two men travel around the country requesting a look at various women’s backsides –  cue lots of (partial) female nudity. This is the type of movie that would never get made today for obvious reasons which is why it’s just so amazing. I mean, how do you even come up with this as a story?

Writer: *hits blunt* “you know what would be cool? A movie about chick’s asses which features cowboys and kung fu”.

Also known as Blood Money I think a better title would be Ass Map, Full Moon or Map to the Arse (rather than stars)… really the ideas are endless. I recently watched a dubbed version and admittedly the dubbing is appalling especially for Lo Lieh but it only adds to the entertainment value. Lee Van Cleef is as cool as ever but he is less po-faced than usual even getting drunk and singing on stage at one point. He probably read the script and thought “I’ll do this shit for free!”

There are several kung fu fight scenes and then the movie climaxes with Lo Lieh facing off against a native fighter while Lee Van Cleef takes out a band of goons with a Gatling gun.

The main villain Yancey Hobbitt is played by Julián Ugarte who quotes the bible constantly and thinks he is righteous wanting the fortune for himself so he can build his own church. He wears a cool long black leather jackets and black hat and is suitably nuts.

The fight scenes are nothing to write home about as we’re hardly talking The Raid here but it’s pretty much impossible to not love this movie.

Overall, I can literally describe The Stranger and the Gunfighter as a load arse and mean every word of it. Lee Van Cleef is awesome and Lo Lieh kicks (and looks at) plenty of ass making this essential!