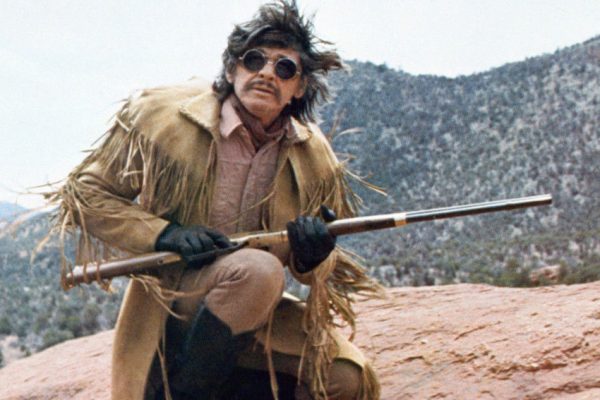 I go into a few spoilers here so if you have never seen this movie then best move along.

The White Buffalo was the second collaboration between Charles Bronson and director J. Lee Thompson and was adapted from the book of the same name. The storyline has rightfully been compared to Moby Dick which was the impression I always got.

It tells the story of an aging Wild Bill Hickok (Charles Bronson) who finds his dreams invaded by the image of a rampaging white buffalo, he decides the only remedy is to find and kill the creature. With the help of his old friend Charlie (Jack Warden), he sets out across the snowy plains, unaware that he’s not the only one looking for the fabled beast. Sioux Chief Crazy Horse (Will Sampson) has recently lost a daughter to the white buffalo, and he fears the girl’s soul won’t rest until he kills it.

It’s a strange beast this movie as it is basically a Western meets Jaws and despite the fact that the majority of it was shot on a soundstage (and looks like it) I still love it. The beast itself was created using animatronics and it does look rather unconvincing at times but it still manages to come across as a nearly unstoppable killing machine; so not only do we get some Western action but also elements of horror.

Bronson is as icy cool as ever and the fact he wears sunglasses throughout only makes him cooler; apparently this is historically accurate as Bill had an eye problem at the time so the glasses were medically required.

The action highlight is a stand-off in the snow covered mountains between Hickok and some cowboys he previously pissed off where he ends up getting saved by Crazy Horse. Some of the language used in the film you certainly wouldn’t hear in today’s movies but it all felt very authentic and I particularly thought Charlie (Jack Warden) was straight out of that era. He hates Indians plain and simple and won’t give Crazy Horse a chance even when Bill wants him to; rather than realize the error of his ways by the end he walks away from his friendship with Bill.

John Barry’s score isn’t one of his more memorable themes but it works just fine and is a little different from what you’d expect from him. He was known for creating romantic sounding music but did something more surreal and interesting with this.

The White Buffalo has a dreamlike atmosphere throughout and you’re never quite sure where it’s headed but you know the climax will have Bill facing his fears and confronting the beast.

If you’ve never seen the movie, go in with an open mind and you may end up loving it like I do. The characters feel believable and there is enough action to keep you entertained until the satisfying finale.