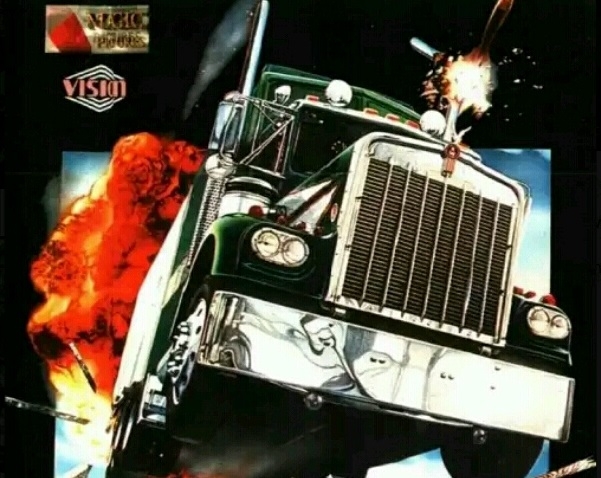 I’ve always enjoyed movies about truckers; not sure why but I think it must be the call of the open road and just the freedom of it all. It’s even better when it’s a movie about a trucker facing off against some terrorists which is what Thunder Run is all about.

Our hero is named Charlie Morrison (Forest Tucker – who died shortly after the film’s release) and he is an immediately appealing character; he’s not some muscle bound badass but an older man in his late 60’s who gave up trucking for his wife and he’s a loving husband and grandfather.

An old friend and colleague offers him $250,000 to transport some plutonium to a military test site but there are terrorists who want to get their hands on it. Charlie agrees as he needs the money; his cobalt mine just isn’t making enough cash so he prepares the truck for war arming it with Molotov cocktails and flamethrowers so any terrorists will regret getting in his way.

Charlie’s grandson Chris comes with him and the pair bond while taking on various bad guys in souped-up cars as they try to get their hands on the plutonium.

The first 40 minutes can probably be skipped and there are a few scenes that could have easily been done as a montage and we wouldn’t have lost anything, so it does feel a little stretched out even at 86 minutes long.

The final 45 minutes is what you’re tuning in for and they are worth the wait as we get some fantastic stunts, practical explosions and cars that fire missiles! It’s sort of like Mad Max except not in a post-apocalyptic future; it is set in the desert though which is an immediate point in its favour.

It also has an awesome 80’s synth score with some choice rock tunes including Thunder Run by David Morgan which plays over the end credits.

I’ve only ever seen Thunder Run on VHS but if ever there’s a movie that deserves an awesome HD upgrade it’s this. Some behind the scenes interviews and videos of how they do some of the stunts would be amazing. FYI I just saw it on Amazon.ca on DVD for a paltry $1,721.50 Canadian dollars…

Overall, Thunder Run may take a while for the vehicular carnage to start but when it does it’s a full throttle, high octane thrill ride and the fact that I got to describe it as high octane has literally made my day. Have you ever come out of a movie theatre and said “hey, that was really high octane wasn’t it?” No, you haven’t.

Also check out how rad that poster is below. I need it framed in my house. 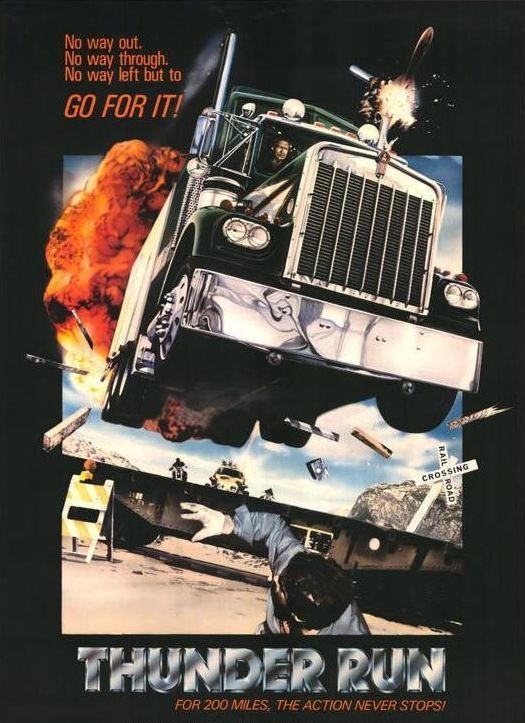