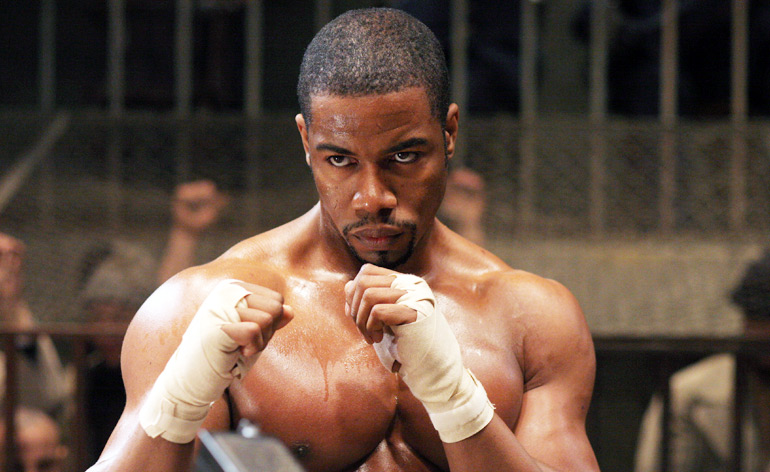 Undisputed II is one of the best martial arts movies I’ve seen in a long time with a genuinely good story and really memorable characters. It really established Scott Adkins as the next action star and made Yuri Boyka a true Icon of Action.

Plot: Sequel to the 2002 film. This time, Heavyweight Champ George “Iceman” Chambers is sent to a Russian Jail on trumped-up drug charges.

Review: I could have sworn I’d reviewed theses movies before but I can’t find them on the site so I’ll start off with Undisputed II and tomorrow we’ll do Part III.

Frankly these two movies are some of the best martial arts/action movies of the past decade with a legendary performance from Scott Adkins, looking unrecognisable as the now iconic Yuri Boyka.

In this movie Boyka is the villain where he is essentially the king of the prison fighting circuit and not someone you would want to mess with. When he walks into a room he just exudes fury and everyone will move out of the way.

He is a man obsessed with becoming the “Most Complete Fighter in the World” and rightly so, as there are few Western action stars that can move quite like Adkins in this role.

What I like about the character of Boyka (as I have said before) is that he isn’t a complete monster; he is a man of honour and when he finds out that one of his opponents was drugged (so Boyka can win) he is furious. He believes that he doesn’t need to cheat to win and that he can’t be the most complete fighter by taking that route. Boyka’s tale is a great story of redemption and as we find out in Part III even a bad man has good in him…

But it’s not just Adkin’s show, we also have the legendary Michael Jai White playing George Chambers, a man wrongfully imprisoned so he can fight Boyka in the underground fighting championship. We really get to see how Jai White can move and he really shows off his fighting prowess; although more of a boxer in this movie he still moves well.

The fight scenes are absolutely mesmerising and unflinchingly brutal with Isaac Florentine directing it all confidently, proving he is one of the best action directors in the business today. I would love to see him work on something with a budget, but for now these movies will do just fine.

The acting in the movie is altogether pretty damn good and the script feels believable and lacks any cheese.

The music also helps to create an exciting atmosphere during the fight scenes with some hip hop music used to good effect.

Overall, Undisputed II is one of the best martial arts movies I’ve seen in a long time with a genuinely good story and really memorable characters. It really established Scott Adkins as the next action star and made Yuri Boyka a true Icon of Action.