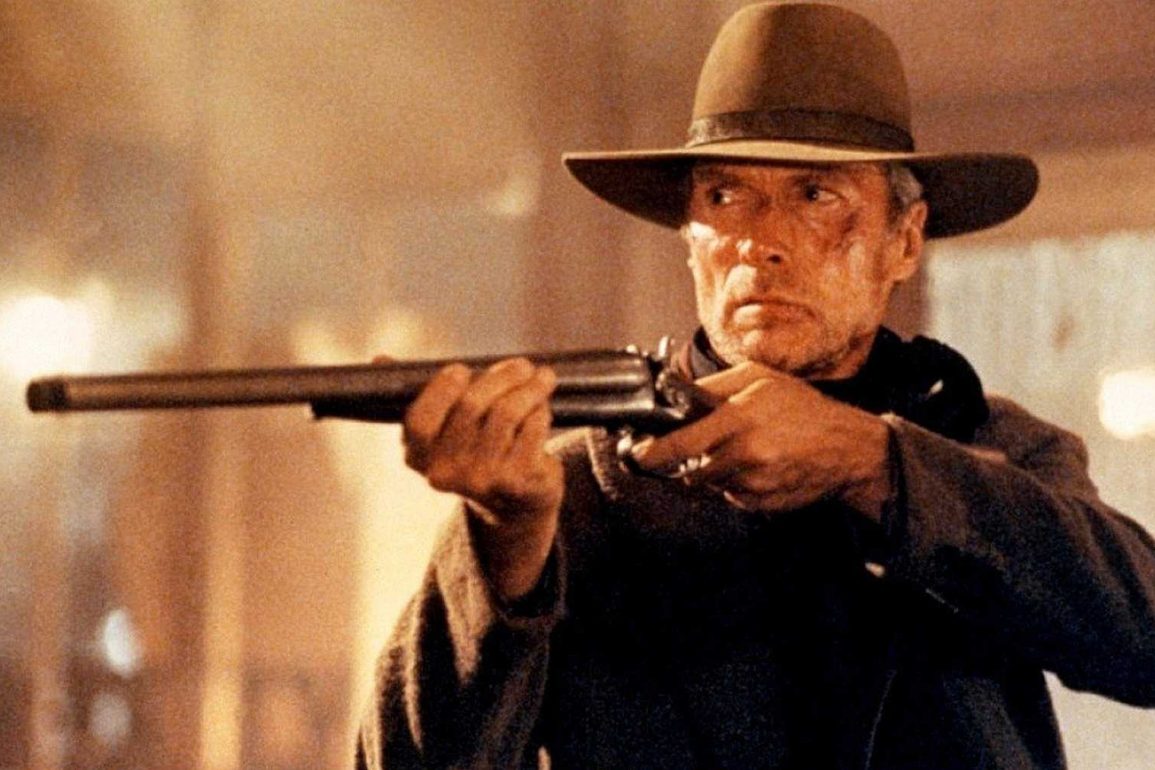 Unforgiven remains one of my favourite movies of all-time with its stunning scenery, mesmerizing performances and shocking violence with Gene Hackman stealing every moment making this one Western that you need to see before you die.

Plot: When prostitute Delilah Fitzgerald (Anna Thomson) is disfigured by a pair of cowboys in Big Whiskey, Wyoming, her fellow brothel workers post a reward for their murder, much to the displeasure of sheriff Little Bill Daggett (Gene Hackman), who doesn’t allow vigilantism in his town. Two groups of gunfighters, one led by aging former bandit William Munny (Clint Eastwood), the other by the florid English Bob (Richard Harris), come to collect the reward, clashing with each other and the sheriff.

Review: There aren’t that many films you can say are perfect but for me Clint Eastwood’s Unforgiven is way up there and is one of my all-time favourite movies. Occasionally you watch Westerns and they can be a little slowburn but you enjoy wallowing in the atmosphere but Unforgiven doesn’t have a single moment I think should be trimmed. It’s beautifully shot with stunning vistas, classic dialogue and considering it’s 2 hours 10 minutes long it’s incredibly well paced.

In the days of the classic Spaghetti Westerns Clint Eastwood would normally be the cool but mysterious stranger who can outgun the best of them and save the day but Unforgiven turns the genre on its head. William Munny (Eastwood) is haunted by the life he led when he was younger and it was his (now deceased) wife Claudia who showed him the error of his ways and he has been a farmer raising his young kids ever since. When a young man calling himself The ‘Schofield Kid’ (Jaimz Woolvett) comes to ask Munny if he will partner up with him to kill some cowboys who cut up a woman he at first declines but then decides he needs the money. He brings along his old friend Ned (Morgan Freeman) and they make their way to do some killing.

What they don’t except is the town of Big Whiskey is run by sadistic Sherriff Little Bill (Gene Hackman) who wants no killing in his town and won’t hold back enforcing his law on anyone he sees as a potential problem.

Gene Hackman always made for an amazing villain and I think Little Bill is one of his absolute best; he isn’t a cartoon bad guy but likes things done his way and when he sees people coming into his town and threatening their way of life he then becomes a savage. I love little details like how he is a lousy carpenter and it’s sort of a running joke throughout that everyone knows this. Nobody could stare at you the way Hackman could which made him constantly menacing with an underlying threat of violence coming at any time. You almost feel bad for English Bob (Richard Harris) when Bill is kicking nine colours out of him but after his preening and arrogance you can’t help but sort of enjoy it.

As the story progresses we see that Little Bill is rather sadistic and takes pleasure in humiliating and hurting people who don’t respect the rules so when he beats up Munny you know he’s not going die of natural causes.

Themes of regret, memories of the past and the consequences of violence are explored throughout and Munny is by no means a hero; rather than being an invincible badass he’s an older man now who even struggles to get on his horse or fire his pistols. It’s hard to believe he was ever the gunslinger he is fabled to be but we still do get to see that payoff in the finale.

The music score is sombre and quiet feeling very different from Sergio Leon’s Westerns; it is in the background and never intrusive. Claudia’s Theme is memorable and is one of my favourite Western scores due to its subtlety.

In terms of action there are a few shoot-outs but the most shocking scene is the assault of Delilah which is as visceral and violent as can be. Every moment of violence is disturbing where you never really cheer on the “hero” to kill the bad guys as every character has shades of grey. There are no good or bad guys, just people who have done good or bad things.

Overall, After nearly 30 years Unforgiven remains one of the best Westerns ever made with iconic dialogue, Gene Hackman at his malevolent best and a side of Eastwood we rarely saw before. It’s a movie I can watch on a regular basis and never tire of due to the sheer quality of the filmmaking. A Classic!