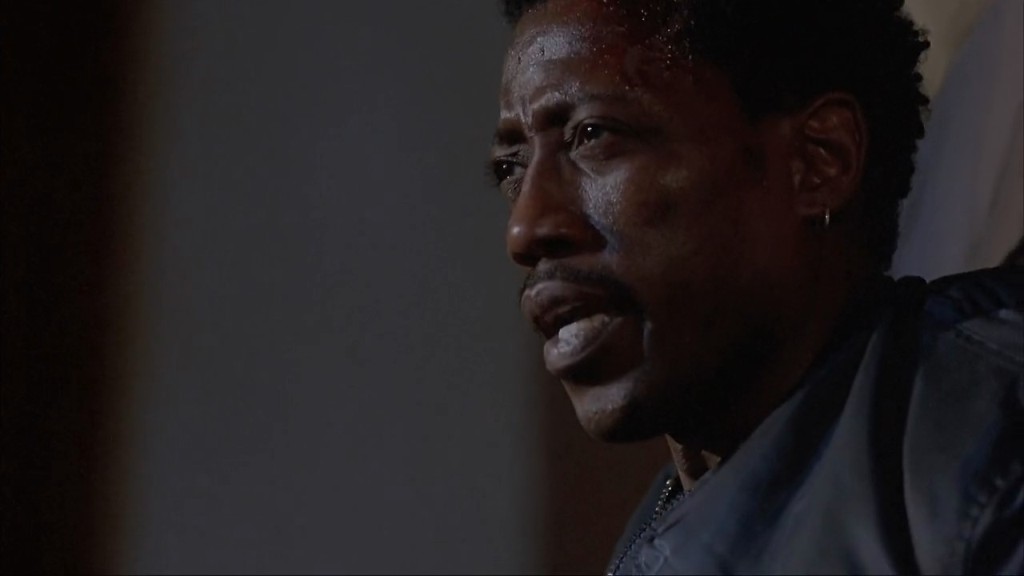 Unstoppable has a decent cast with a few entertaining moments but the concept is wasted and lacks any memorable action scenes.

Plot: Following a traumatic experience, former Special Forces member Dean Cage (Wesley Snipes) is trying to pick up the pieces of his fractured life. With the help of detective Amy Knight (Jacqueline Obradors), Dean tries to block out the painful wartime memories, including the death of his best friend. Everything goes awry, however, when Dean is mistaken for a rogue CIA agent. He is abducted and given a truth serum, and now he must find an antidote to the debilitating psychotropic drug.

Review: This isn’t the Unstoppable from the late great Tony Scott but a 2004 movie starring Wesley Snipes. Although not an amazing movie I thought it had a genuinely interesting story. Our hero being drugged by some mysterious government types and spending the movie not knowing what’s real or not was a fascinating idea, giving us some trippy visuals and a protagonist who may or may not be having a mental breakdown due to PTSD. Snipes can play this role in his sleep and to this day he doesn’t get enough credit as an actor but I think he’s one of the few action heroes who can give us a solid performance every time even if the film isn’t the greatest.

The supporting cast is also impressive including Kim Coates, Adewale Akinnuoye-Agbaje, Stuart Wilson and a very young looking Mark Sheppard (from Supernatural). I think they maybe had a an idea that this was going to be a better movie than it was or maybe they just needed to pay the rent; either way it does waste some of the talent on-screen in thankless roles.

Jacqueline Obradors is also pretty unbelievable as a cop who is trying to protect Cage from all of the people trying to capture/kill him; considering Knight and Cage are meant to be lovers you never really believe their relationship.

Despite the interesting concept and a fine cast the film doesn’t quite live up to it, lacking in the action department; there is about 1 actual fight in the movie and the rest features Snipes running around looking confused as he tries to work out what is real and what is a hallucination. The action highlight is arguably the truck falling off the highway which was nicely done but I generally found the pacing wasn’t as exciting or tense as it could have been.

It’s also pretty dumb with forgettable dialogue and some stretches of logic that go just a little too far. At no point do you ever really get the impression that Snipes or anyone else for that matter is particularly unstoppable so it’s an odd choice of title.

Overall, Unstoppable has a decent cast with a few entertaining moments but the concept is wasted and lacks any memorable action scenes.