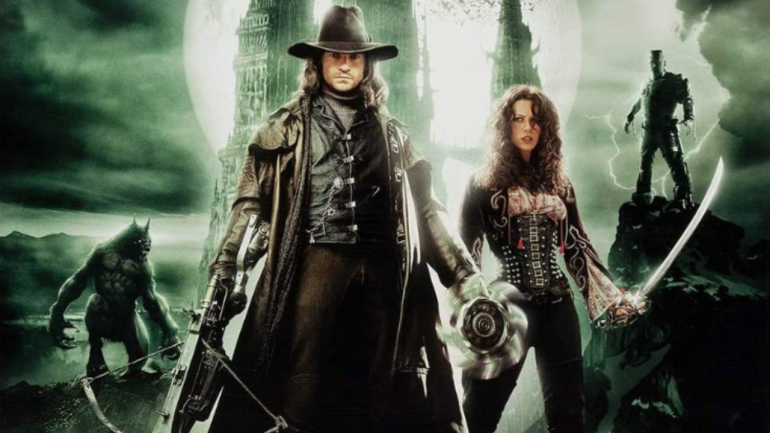 Van Helsing is let down by a sub par script and cartoonish CG but I do still have a soft spot for the film with Hugh Jackman as likeable as ever and Richard Roxburgh chewing the scenery as Dracula. It’s action-packed and I find it a hard film to dislike. The 4K upgrade looks and sounds fantastic but most of the special features are already on the Blu-ray so it’s hard to recommend if you already have it.

Plot: Famed monster slayer Gabriel Van Helsing (Hugh Jackman) is dispatched to Transylvania to assist the last of the Valerious bloodline in defeating Count Dracula (Richard Roxburgh). Anna Valerious (Kate Beckinsale) reveals that Dracula has formed an unholy alliance with Dr. Frankenstein’s monster (Shuler Hensley) and is hell-bent on exacting a centuries-old curse on her family. Together Anna and Van Helsing set out to destroy their common enemy, but uncover some unsettling secrets along the way.

Review: I’ve always felt like Van Helsing was the closest thing to a live action Castlevania adaptation that we’ve seen so far; growing up Castlevania IV on the SNES was my favourite video-game (and it still is); I loved the music, the gameplay and just the sheer atmosphere. When Van Helsing starring Hugh Jackman was announced I was delighted; what a great concept! ALL of the Universal Monsters together at last in a modern, big budget spectacle. The teaser posters were real attention grabbers and really got me stoked for the movie.

It never quite lived up to my expectations as the script was mostly terrible and a lot of the CG was even worse… and yet, I still really enjoy the movie. After recently picking it up on 4K Van Helsing looks better than ever and I forgot just how stunning the set design was filled with castles, cobwebs, candlelight and fantastical creatures.

Hugh Jackman was well cast in the role of Van Helsing and he looks the part with his hat and costume; he made the character of Van Helsing really like an old-school James Bond crossed Batman using weapons and gadgets to dispatch his prey but he also has his own Q (David Wenham) or Carl as he is called in this. Carl provides much of the humour and is quite different from his roles in The Lord of the Rings and 300.

Van Helsing himself spends the movie working for Rome sent around the world to kill anything that seems like a monster which has made him a wanted man; the people don’t see him as a hero but a murderer so he has to deal with that as well as watching his victims die. The first that we see is Mr. Hyde (voiced by Robbie Coltrane) and he’s a fun character but once again the effects don’t hold up at all so he just constantly looks like a special effect.

*spoiler alert* Kate Beckinsale looks as perfect as ever and Anna is sympathetic yet tough but it still bothers me that they kill her off at the end as it ends the movie on a somewhat downbeat note. I remember watching this in the cinema and when you see her ghost appear in the clouds our audience started sniggering so although it was meant to be this moving scene it ends up being unintentionally funny.

I love Richard Roxburgh as Dracula who hams it up wonderfully and has some entertaining lines of dialogue; the majority of the cast overact in this movie (especially Frankenstein’s monster) but I could see what they were trying to do by giving it the classic Universal Monster movie vibe. The weakest cast members were the Brides of Dracula as every line of dialogue they have is painful; it’s too bad as they looked the part and could have been creepy if they were written better.

The reason why Van Helsing reminded me of Castlevania is mostly due to the Masquerade Ball Scene which feels like something straight out of that world; it has this creepy atmosphere especially the otherworldly opera singer and I wish the movie did more of actually being scary.

The highlight of the entire movie for me was the music score by Alan Silvestri mixing Gothic moodiness with swashbuckling heroics and is one of his absolute best. One of the many standout scenes was the horse & carriage chase through the forest where the music is loud and bombastic building up the excitement to an explosive climax.

This movie is 2 hours of near constant action rarely stopping for breath as Van Helsing combats various creatures of the night, swings heroically from castles and uses his cool gadgets on a regular basis.

I always wanted a sequel (the animated movie doesn’t count) as there was some franchise potential here especially with Gabriel exploring more of his past, but it’s been too long now so obviously it’s not going to happen.

Director Stephen Sommers has been quiet for a few years and I hear he is meant to be helming a disaster movie called When Worlds Collide but there’s no word on a release date as yet; he knew how to make fun escapist adventures with movies like Van Helsing, The Mummy and Deep Rising so I hope When Worlds Collide is more of the same.

Anyway, the 4K of Van Helsing looks incredible and I recently bought a 50″ 4K television; this was the first full movie I watched on it and it made for a fast 2 hours. The sound was also impressive however, for some reason I had to change the settings on the 4K player. It played music during the menus but when you start the movie there was no sound so if this is ever an issue, go to your player sound settings and change it to PCM.

There are a plethora of special features and I’m sure I haven’t made it through all of them but the commentary from Stephen Sommers and Bob Ducsay is fascinating as they talk about using modern visual effects in the black and white sequence at the beginning and all the challenges that brought. Sommers’ enthusiasm is infectious and he is clearly a fan of the classic Universal Monster movies but there is also another commentary featuring Richard Roxburgh, Shuler Henley and Will Kemp. A lot of the special features are on the Blu-ray (included here) so if you already own the movie on that format then there isn’t much to make this a necessary addition to your collection other than the movie itself.

Overall, Van Helsing is tremendous fun despite the poor script and occasionally cartoonish visual effects; if some of the dialogue was better and the monsters were done practically this could have been a classic. The movie looks and sounds amazing on 4K but if you already own it on Blu-ray then it’s not really worth the upgrade.