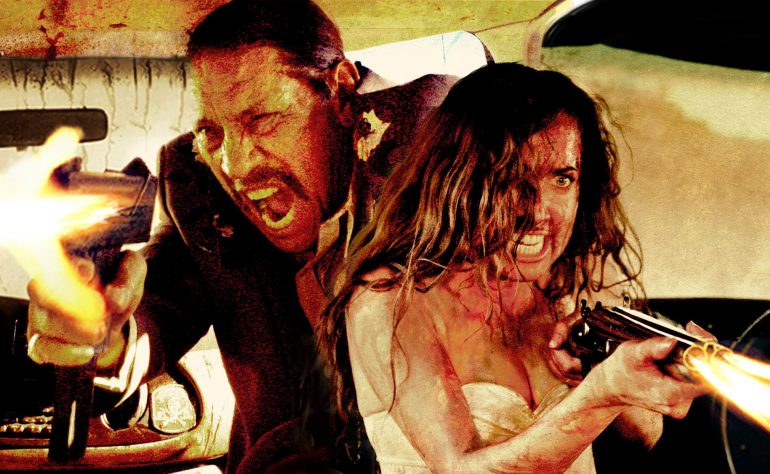 Vanish has been falsely advertised as a Danny Trejo movie and he only shows up at the end but there are some thrills and gore to make it entertaining.

Plot: A kidnapped young woman is forced on a road trip full of murder and mayhem that takes place entirely in her captor’s getaway van.

Review: The trailers and DVD cover will make you think you’re going to watch a Danny Trejo movie but sadly Machete literally has about 2 minutes of screen time and that’s at the end. That’s not to say it’s a terrible movie, it’s actually not too bad and has plenty of bloody violence as well. The main problems are the lack of any likeable or sympathetic characters.

You won’t really care what happens to kidnap victim Emma (Maiara Walsh) as she’s a bit of an annoying smart ass. Still it’s refreshing to see a female character that can very much hold her own against her kidnappers and the blood drenched finale is pretty satisfying.

It starts off quite strongly and is rather intense but after about 15-20 minutes it gets less interesting and has a lot of talking. There is only so much you can do though with a contained action thriller and this entire story takes place inside the kidnapper’s van.

Thankfully there is some rather awesome violence and at one point a guy is hacked to death with a machete; it’s well done and is disturbing as well.

The script is surprisingly good and I especially liked the banter between the two brothers at the start which felt natural.

You know as soon as Shane shows up that he isn’t quite what he seems and as the story progresses he is integral to the story and turns it all on its head.

The acting in in general is good and we get a nice cameo from Tony Todd who manages to be creepy even when he’s playing a cop.

Overall, Vanish has been falsely advertised as a Danny Trejo movie and he only shows up at the end but there are some thrills and gore to make it entertaining. I’d go watch Machete instead though…