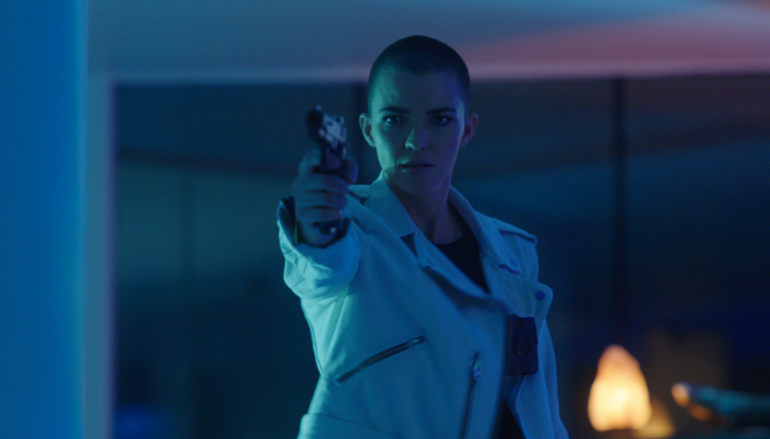 Aside from a few stylistic touches Vanquish is mostly terrible with a familiar story that never generates any excitement. Ruby Rose has yet to convince as an action star but Morgan Freeman does the best he can with what he’s given. The action is poorly shot so we never really care what’s happening so best to sit this one out.

Plot: A retired cop forces a former drug courier to do his bidding by holding her daughter hostage. Armed with guns, guts and a motorcycle, she must now take out a series of violent gangsters — or never see her child again.

Review: Ruby Rose and Morgan Freeman star in this rather dull affair that fails to generate any thrills or excitement. It’s a shame as director George Gallo helmed Trapped in Paradise from 1994 which I always enjoyed.

At first I thought Vanquish was from a first time indie director due to how bad this film is.

I normally try to find something positive to say about any movie I review but it’s a struggle aside from I like Morgan Freeman’s house in it and there are a few nice stylish flourishes but aside from that it’s the longest 94 minutes I’ve seen for a while.

The action is mostly just a few brief shoot-outs and boring chases that are so overly stylized that it takes away any tension. Why should I care about any of these characters? No one is given any depth at all and the scenes with the corrupt cops sitting around talking are screamingly tedious.

Freeman must have needed rent money or he owed the director a favour but I can’t for the life of me understand why he would star in this. He is sort of a villain in Vanquish but not really so we never like or hate him… I did find his dentures distracting though.

I actually like Ruby Rose on screen but no matter how hard filmmakers try I don’t believe her as an action star; Vanquish doesn’t do her any favours either as she has several clunky lines of dialogue that just fall flat.

The music score has its moments especially at the end but like the rest of the movie it’s forgettable stuff.

Overall, Vanquish is one of the worst movies of the year so far with little to recommend it; if you’re a diehard Ruby Rose or Morgan Freeman fan then you can maybe salvage something from it but I couldn’t stand this film.