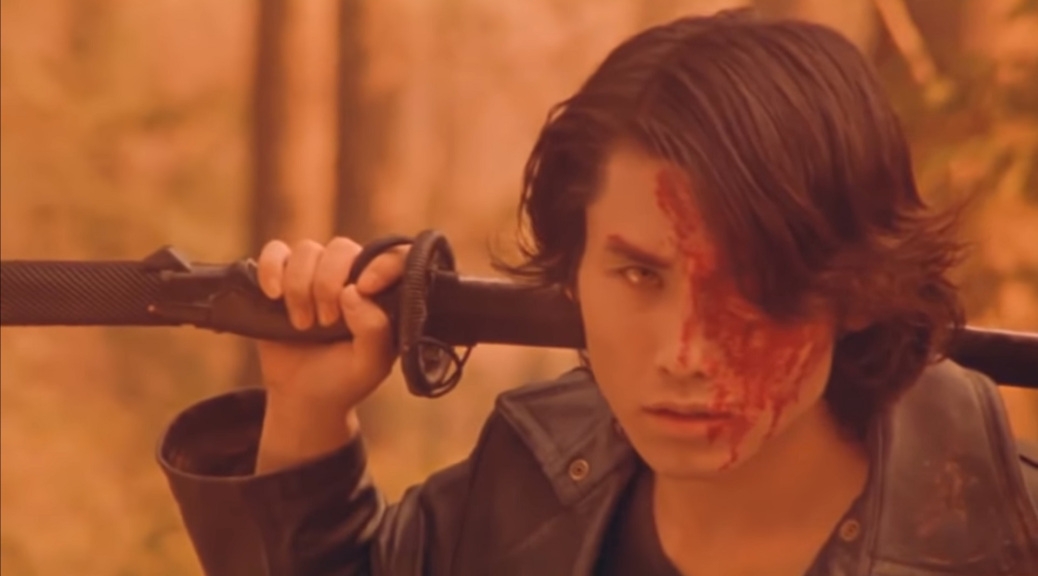 Arrow Video are releasing a new special edition of this underrated action gem for it’s 20th anniversary starring Tak Sakaguchi who plays Prisoner KSC2-303; he has just escaped prison with a fellow inmate and met up with a group of gangsters who have kidnapped a woman. The only thing is they are inside what is known as The Forest of Resurrection, the 444th portal to the other side. Their troubles begin when those once killed and buried in the forest come back from the dead.

Versus is 2 hours of utter mayhem and carnage with some of the goriest, most over the top action scenes you will ever see including zombies with guns!

Tak Sakaguchi needs to be a household name as he has real screen presence and his martial arts skills are amazing to watch on screen.

The characters are all so outrageous but none of them actually have names; if you go to IMDB they are called things like The Man, The Girl, One Handed Cop, Motorcycle-riding yakuza with revolver or Yakuza Leader with butterfly knife. Yuichiro Arai plays said Yakuza Leader and he is like The Joker; just totally batshit crazy smiling and laughing as he kills.

There is nothing subtle about this film; there are fountains of blood, limbs hacked off every few seconds and some of the squishiest sound effects of all time. It’s ridiculous stuff and it knows it with a wacky sense of humour to go along with the bloody violence. There isn’t anything disturbing about it as it’s all such a cartoon that you’re just laughing along with it. I would love to see this with an audience of similarly minded gorehounds in a theatre but that won’t be for a while I imagine…

There is some innovative camera work to go along with the action and it helps to keep up the kinetic pacing.

In terms of flaws it is a little too long and for some reason some of the translations don’t make any sense like Yellowstone National Park is not in Canada and the FBI Headquarters are not in Langley, that’s the CIA.

The music is suitably cool and I love how any time Tak puts on a leather jacket or sunglasses some righteous electric guitar plays which just makes it even more of a riot.

After 20 years Versus remains one of the most insanely violent and entertaining action movies of recent times; if you haven’t seen it you’re in for a treat as it is packed with memorable characters, near constant action and more bloodshed than a slaughterhouse. Pick up the new Blu-ray when it comes out in December.

Special features for the upcoming release are below:

SPECIAL EDITION CONTENTS
Brand new 2K restoration from original film elements by Arrow Films, approved by director Ryûhei Kitamura
High Definition (1080p) Blu-ray presentations of both versions of the film: the original 2000 cut and 2004 s Ultimate Versus, featuring over 10 minutes of new and revised footage
Reversible sleeve featuring original and newly commissioned artwork by Chris Malbon
DISC 1: VERSUS
Original lossless Japanese 5.1 and 2.0 stereo audio and English 2.0 stereo audio
Optional English subtitles
Audio commentary by Audio commentary by Kitamura, cast and crew
Audio commentary by Kitamura and the cast and crew
New visual essay on the career of Kitamura by Japanese cinema expert Jasper Sharp
Behind Versus, a two-part behind-the-scenes documentary exploring the film s production
First Contact: Versus Evolution, a featurette exploring the film s origins
Tak Sakaguchi s One-Man Journey, an archival featurette on the actor s visit to the 2001 Japan Film Festival in Hamburg
Film festival screening footage
Team Versus, a brief look inside the Napalm Films office
Deep in the Woods, an archival featurette featuring interviews with Kitamura, cast and crew
The Encounter, an archival interview with editor Shûichi Kakesu
Deleted scenes with audio commentary by Kitamura, cast and crew
Nervous and Nervous 2, two side story mini-movies featuring characters from the main feature
Featurette on the making of Nervous 2
Versus FF Version, a condensed, 20-minute recut of the film
Multiple trailers
Image gallery
DISC 2: ULTIMATE VERSUS
Original lossless Japanese 6.1 and 2.0 stereo audio and English 6.1 and 2.0 stereo audio
Optional English subtitles
Audio commentary by Kitamura, cast and crew
Sakigake! Otoko versus Juku, a featurette on the newly shot material for Ultimate Versus
FIRST PRESSING ONLY: illustrated collector s booklet featuring new writing on the film and a reprinted interview with Kitamura by Tom Mes, and notes on the making of the film by Kitamura