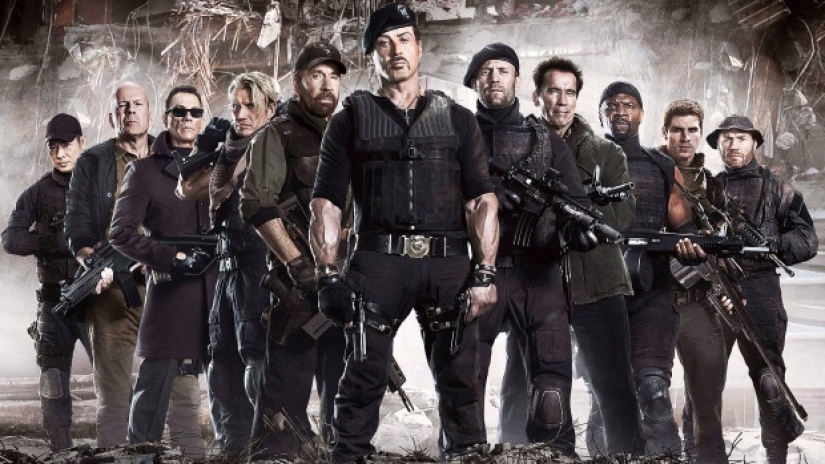 At The Action Elite you might have guessed that we quite enjoy The Expendables movies. Sure they have their flaws, but both are hugely entertaining action movies and in these days of constant superhero movies and remakes, it’s great that Sly and Co. have kept the best kind of action alive. But which one is the better film? Let’s discuss…

Remember the fever pitch excitement we real action fans had when we heard this film was getting made? All of our favourite action stars finally uniting to kick some ass. It came along at just the right time when the genre was basically dead.

The cast: Stallone, Statham, Lundgren, Li, Couture, Crews, Austin and Eric Roberts. Cameos from Bruce and Arnie. To see all of the characters on screen together was a dream come true. Imagine if it had happened in the late 80’s though. Rather than $100 Million domestically, it would have been HUGE! Better late than never, I say.

The Basketball Scene: “I’ll deflate all your balls… FRIEND!” Statham beats up a jock asshole and all his buddies after said asshole beats up Charisma Carpenter. One of the best kinds of action scene is a bully getting his comeuppance. Satisfying in every way and remains my favourite scene of both movies. To me, Statham OWNS the first film.

Dolph vs. Jet Li. Watching these two titans beat the hell out of other is exhilarating and is another highlight.

Brian Tyler’s music: The score is fantastic with a memorable theme tune that has a sad nobility to it. Aging heroes trying to find a place in a world where heroes are no longer welcome.

Shaky Cam: Now everyone knows this is my pet hate in modern cinema. Every younger director seems to suffer from epilepsy while trying to shoot an action scene and I was disappointed that Sly has joined them. It may work in a riot scene or something similar, but this kind of film did not require it. It was so distracting in many of the action scenes that it ruined the feel of a lot of them and took you out of the movie.

CGI Blood: I’m pretty sure they were tempted to go for a PG-13 rating for the first one and the CGI blood was added in post… and you can tell. CGI blood ALWAYS looks like shit. It is never convincing and just looks like a video game, the same can be said for CGI explosions. Squibs worked for Sam Peckinpah and every other action director since. What dickhead thought this was a good idea?

Script: Some of the dialogue was incredibly cheesy, even for an action movie.

The pacing was off and it’s frankly dull in the middle section..

The cast is once again superb, except this time you’ve also got Scott Adkins, Chuck Norris and JCVD. Arnie and Bruce have meatier roles and get to take part in the action. Bruce has some good lines and feels more like McClane.

Brian Tyler’s score: Once again adds to the film maintaining the noble themes of the original.

Chuck Norris almost steals the movie in his brief few scenes. He does get to kick ass though and every time he’s on screen is pretty funny.

Jean-Claude Van Damme is villain of the year. I already knew he was going to be good as he was excellent in the little known “Replicant” where he plays a serial killer.

Breathtaking action scenes, especially the opening 15 minutes which surely has a bodycount in the thousands.

Great fight scenes with NO SHAKY CAM this time. JCVD vs. Sly is fight scene of the year but the fight between Statham and Adkins is also awesome. You even get a return of the epic bad guy death complete with one liner: “Nothing beats the classics!”

Now this is a problem with both films: there is too much humour. Arnie’s dialogue in this is frankly terrible and rather than being funny, it’s just cringe-worthy. “What’s next, Rambo?”  Ohohoh, I get it; it’s funny, because Sly is in Rambo. Oh clever reference… *shakes head*

If the tone had been more serious with a vibe more like “Where Eagles Dare” then it would have worked better.

JCVD isn’t in it enough and his character could have had more to do. We all know he steals the movie but he should have been in it more.

Too short; it flew by and the final shoot-out isn’t quite as spectacular as the first movie.

The plot just isn’t that interesting; rather than just making it like “Yaay, look it’s Arnie and Bruce and they’re taking the piss out of themselves”, it could have been so much more.

Statham really is only there for comic relief and has a bigger role in the first film.

Neither film is flawless, but I love them both just for the sheer nostalgia of seeing all my favourite heroes on screen together. I still feel that both films are a missed opportunity and could have been something really special. Although the box office hasn’t been that great for Part 2, I live in hope for an Expendables 3. My suggestions would be to create a more interesting story. Enough with the “I’ll Be Back” and “Yippee-Kiyay’s”; yeah, they’re fun but we’ve all had a laugh, now how about giving us a more serious film? It can still have humour but really go for the old-school “men-on-a-mission” movie.

Just because they are older doesn’t mean they ain’t useful. They could still kick the asses of most of young Hollywood today. Have them in genuine peril and maybe even kill off a few more cast members. Have them go out in a blaze of glory and create something special. If you watch Demolition Man, it was Stallone making a joke at himself, but the script was just so much better.

It’s probably difficult to create movie magic when you have so many egos vying for attention on screen, but if they all stand back from it, they could do something for the ages.

AND THE WINNER IS…

It has JCVD as the villain, no shaky cam and is still my favourite action movie of the year. Like I say, both films could be so much better, but it’s slim pickings for real action these days and we gotta take what we can get. So what do you guys think? Part 1 or Part 2? Any suggestions for a Part 3?