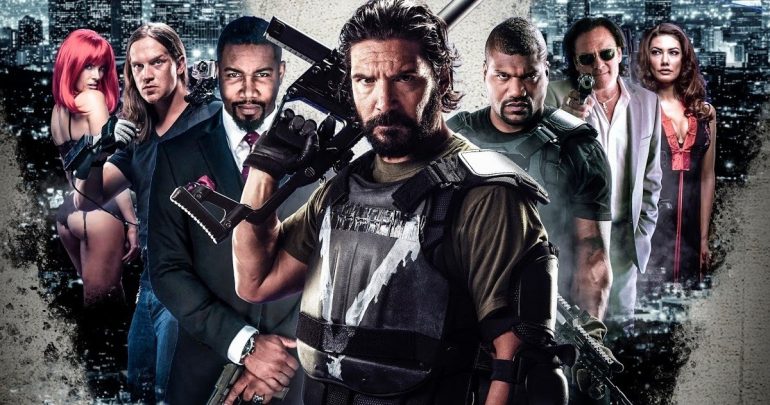 Vigilante Diaries has the perfect blend of bullets, babes and bloodshed; it’s just a shame the second half felt like a different movie entirely. It’s definitely worth watching though and the characters are awesome.

Plot: The Vigilante Diaries is a high octane action-adventure film featuring 90’s movie heroes, explosive action, and international espionage. The film revolves around a team of black-ops agents turned crime-fighters, led by a brooding anti-hero, known only as “The Vigilante.” These jam-packed missions of rescue and revenge take us from the mega-mansions and underbelly of Los Angeles to far away places like Iraq, Armenia, Russia, and The United Kingdom to introduce us to a cast of colorful, dangerous, and hilarious characters. From Beverly Hills filmmaker Mike Hanover, to a trio of Asian femme fatales, to ruthless Armenian mobsters, and at the top, a pair of deep cover super spies hell bent on throwing the world into chaos.

Review: Christian Sesma is one of my favourite indie directors working today; like William Kaufman, he can make a film with a low budget look like it has studio level production values.

Vigilante Diaries is one of his slickest movies yet with ambitious ideas and a globetrotting plot. It has hard R violence, nudity and a top notch cast that includes Paul Sloan, Michael Jai White, Quentin ‘Rampage’ Jackson and Michael Madsen.

Sloan has real screen presence and was born to be an action star; he plays The Vigilante in this movie who really does go through quite the ordeal, from getting captured and tortured to having his family kidnapped, there’s never a dull moment in this man’s life.

This movie manages to stand out as something a little different with an unpredictable story that spans around the globe.  I especially liked seeing my hometown of Glasgow in an action movie although I’m pretty sure we didn’t require subtitles for what the locals were saying; I understood them just fine.

If I’m being honest I would have to say I preferred the first half of the movie though where it was a more straightforward team up story with a rag tag group of badasses working together to save The Vigilante from his captors. The second half feels like another movie entirely and felt a little disjointed with a few too many characters; for me it took away the sense of urgency from The Vigilante’s rescue of his wife and child.

The action is well executed and the fight between Levy Tran and Mary Christina Brown was a definite highlight.

It’s incredibly stylish and has nods to all kinds of classic actioners including RoboCop, Predator and even Star Wars.

The bodycount must be in the hundreds too which is fine by me; hopefully someone does a Kill Count as I’d like to find out the final tally.

The characters are all far too interesting to be in only one movie so I would love to see a follow up where we get to spend more time with them. Michael Jai White has a brief but decent fight with Rampage Jackson and there are a few other cool action moments which defy the movie’s budgetary restraints.

Overall, Vigilante Diaries has the perfect blend of bullets, babes and bloodshed; it’s just a shame the second half felt like a different movie entirely. It’s definitely worth watching though and the characters are awesome.