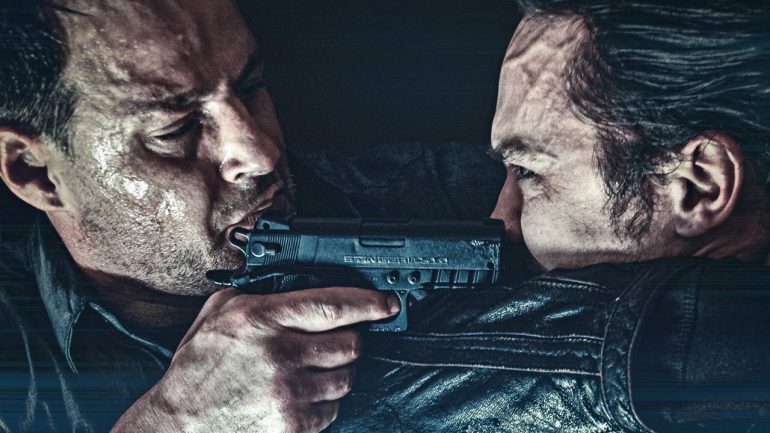 Vincent Lecrocq studied filmmaking in Paris, then began to shoot some music videos and short films including They were in Normandy (2010) and Survivant(s) (2010) which are now available on DVD.

Vincent stopped by The Action Elite to chat with us about Tension(s).

Can you tell us how Tension(s) came together and how you got involved?

That’s a pretty long story. I’ll try to make it short. Back in 2006, I was about to shoot a war short film called “They were in Normandy”. I was looking for some actors with some stunt and physical abilities and I saw a short film produced by François Méquer (producer, writer of Tension(s)…). He was also playing the leading role, and he was great in it. We met in Paris and we discovered that we had the exact same taste in movies. Unfortunately, it turned out he was not available for the shoot. At this time, François was an actor and a professional stuntman in France. But he began to write and produce some short films.

We kept in touch for many years hoping to have the possibility to work together one day or another. While François moved to Canada, I directed some short films and music videos during a few years. François met Screenwriter Sean Moussavi (writer as well as producer of Tension(s)…). They both decided to create their own company and began to write some scripts. On my side, I made the short film “Survivant(s)” which had some public and critical success when the movie was distributed in DVD in Europe.

One day in 2010, François sent me the Tension(s) script by e-mail and he told me that Sean and himself were developing the script to make the movie the next year and asked me if I was interested in being attached to the project. I read the script, it was really really good and I instantly fell in love with it. They both watched all my short films, demo reel and so on and they both agreed I could be the director. Somewhere in fall 2010, I received a phone call from François. His first words were: “Ok buddy, when are you moving to Toronto to make the movie?” In January 2011 I moved to Toronto for 4 months to shoot Tension(s)…

This is your first full feature; how daunting was it to come aboard and what kind of challenges did you face?

Shooting the movie was not so difficult. One of the biggest challenges was the money, because it was a low budget movie.  François and I had some skills in making movies with very low budget thanks to our previous experiences in short films. We tried to find the right cast and crew, find some good equipment (lights, cameras, and so on…), and we just gave it a try. Shooting an independent film, it’s like shooting a short film, but instead of a few days of shooting, it takes several weeks. We shot Tension(s) in 17 days, which is really fast, but 70% of the movie takes place in the same location. Today, we are facing our biggest challenge: selling the movie to many distributors all over the world.

What was it about the story that made you want to direct?

When I was a kid my father took me to the theater to see the Walt Disney classic “The Black Cauldron”. It was a great shock to me. Then I saw the Star Wars movies, the Indiana Jones movies, the Back to the Future trilogy and so on… I became addicted to movies. I started making short films on video around the age of 12. I began to study business, but the love for film has caught up with me and I decided to study filmmaking. I continued to make short films and here I am today at the helm of my first feature film.

Why was Louis Mandylor the perfect choice to play Jake?

Two very simple reasons. First of all, Louis is an amazing actor, I mean, really really amazing. He has great experience, he played in many movies, many genres and he has some great skills in weapon and fighting techniques. Second of all, Louis is a truly very very nice person.

In fact, hiring Louis was not only a good idea, it probably was the best idea. He has been a huge blessing for the entire project and, to be honest, working with Louis Mandylor has been one of the best filming experiences I’ve ever had and the most fulfilling cooperation of my career…

Tension(s) looks like it has some great action scenes; are you a fan of martial arts movies and are there any that have influenced the fighting styles in the movie? How would you describe the action in the movie? For example, when you watch some martial arts films the fights look choreographed and you can tell it’s “movie fighting” and in other films the fights look incredibly realistic…

I am a fan of action movies and martial arts movies. François, who is also a fight choreographer, and myself we tried to make the fight look realistic more than just over-choreographed fights. François is a huge fan of martial arts, he loves the martial arts movies from the 80’s and 90’s. I’m more interested in, you know, these modern fights which are more direct that we can see nowadays (Bourne Identity, Taken, and so on). So we tried to mix these 2 styles in the fight scenes of Tension(s). I also have a friend who practices MMA in France. He came to Toronto for a week and we’ve added a short fight scene for him with some “on the ground” stuff. Louis is also involved in a very short but really intense fight scene. He choreographed this fight scene himself with the help of François.

You can see this in the Behind The Scene Featurette N°4:

What’s interesting is that the characters aren’t one-dimensional. You said recently that David Kinsman’s character is the villain but also a victim. Was it important that every character not be black or white?

Yes! It was. François and Sean wrote the script, and they both did an amazing job. Tension(s) script is very smart, and this is why I wanted to make the movie. In Tension(s), you’ll see that every main character has his own bright and dark side. Some of the good guys did bad things in the past, some of the bad guys are maybe not as bad as we think, and so on… When I say that David Kinsman’s character is the villain but also a victim, it’s because a particular reason in the movie forces him to act like that. But I can’t tell you more, Tension(s) script is full of surprises and twists.

As the film is all about tension I have to ask and this is a question I love asking directors; what do you think the key ingredients are in building tension?

I think it’s a combination of ingredients. The basic ingredient is, in my opinion, the script. If the tension is also well described in the script, it’s a good point. Then, you have to find the good actors. When you have these 2 ingredients, you can shoot the scene. I could say that choosing the right camera angles is important, and it is, but more than that it’s the way you’re gonna edit the scene, that’s my third important ingredient: editing. And then, like when you are cooking, at the end you add some pepper, salt, and so on; this is the music, the color grading, and so on… And if you are able to use all these ingredients in the right way, you are able to build tension in your scenes.

Were there certain scenes you had envisioned in your mind when reading the screenplay but turned out quite different? Following on from that, did the film come out the way you expected/wanted it to in the end?

Of course, as a director, you often have some, you know, very cool ideas. Sometimes you aren’t able to do it the way you want. When you are shooting a movie, you always have to adapt your ideas with the budget, the time, the weather, and so on. I had some ideas for particular shots which we weren’t able to afford with the budget. But to be honest, the film is still very close to my initial idea and yes, I can tell that the film came out the way we expected it.

I will tell you a little story, the only scene that really changed significantly is the ending scene. In the script, it was a basic dialogue to conclude the story. Louis suggested a different ending to improve the emotional aspect of the movie. As producers, writers and myself have agreed that it was a really good idea, it became the actual ending of the movie.

I’m still working on Tension(s) to promote the film, help to sell it and so on. On the other side, I’m currently working on several projects. I’m planning to make a feature film based on my short film “Survivant(s)”. I would like to get Louis Mandylor involved in this one, but the script is far from being completed. So, before that, there is another project that I would like to be my next feature film. It’s a survival movie called “The Ruins of Tindaya” that I wrote myself.

Many thanks for taking the time to chat with The Action Elite and good luck with the film.