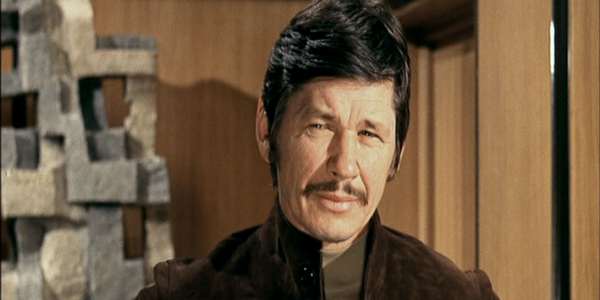 Violent City AKA The Family (1970) Review

Violent City isn’t a classic but even an average Bronson movie is worth watching and this has enough in its favour to be at least rental worthy.

Plot: A hitman is double-crossed by his girlfriend and barely escapes a murder attempt. He then sets out to take his revenge on the woman and the gang boss who put her up to it.

Review: Violent City isn’t one of the greatest Charles Bronson movies ever but it’s still entertaining and no one plays the stoic badass better than him. There is even a scene in prison where he allows a tarantula to crawl over him simply to show that he is tough as nails.

It starts off with a barnstorming car chase which is only let down by some crappy blue screen but there were still some impressive moments.

Because some of the movie is in Italian the dubbing/acting isn’t the best and Bronson’s wife Jill Ireland was never an Oscar worthy actress either. What does redeem the film though is Telly Savalas and Bronson who are at their tough guy best.

A standout scene is when a reporter wants to tell the story of Vanessa (Ireland) but crime lord Al Weber (Savalas) doesn’t want anything mentioned. He simply smiles at the reporter’s boss and says “you don’t have a job anymore, does he?” The boss shifts awkwardly and then reluctantly agrees to fire the reporter. It’s a brilliant scene demonstrating Weber’s power which he holds over anyone he meets, making him quietly terrifying.

A few scenes go on for too long giving the pacing a bit of a lull but the unpredictable plot and satisfying finale make it worth watching.

Overall, Violent City isn’t a classic but even an average Bronson movie is worth watching and this has enough in its favour to be at least rental worthy.