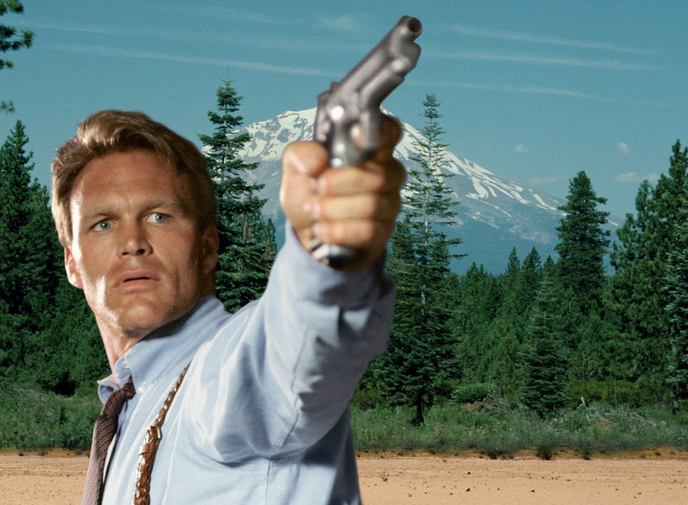 Virus is elevated by the mere presence of Brian Bosworth and it’s funny to see Corner Gas star Eric Peterson playing an antagonist but it’s not especially exciting despite a few fun action scenes.

Plot: Secret Service agent Ken Fairchild (Brian Bosworth) winds up venturing into the heart of a national park when a truck containing biological weapons crashes while traveling through the wilderness sanctuary. Investigating in anticipation of a presidential visit to the area, Fairchild receives assistance from the lovely Dr. Larraine Keller (Leah Pinsent), but has to face off against criminals who want to obtain the weapons for their own nefarious purposes.

Review: I’m sure nobody is fed up hearing the word “virus” after the past few years so today I thought I would look back at the 1996 action thriller Virus (also known as Spill) starring Brian “The Boz” Bosworth.

This feels like a made for TV movie lacking a decent budget and isn’t the most exciting tale ever but Brian Bosworth makes for an appealing protagonist as he tries to stop a virus from spreading which could potentially wipe out thousands of people.

If you’re from Canada (where Virus is mostly filmed) you’ll recognize Corner Gas star Eric Peterson in a surprisingly effective villainous role as Eric Black; I’m also pretty sure some of it was shot in Rockwood Conservation Area near Milton as I go there often and also Algonquin where I also try to visit once a year.

Anyway, I’ve had this movie on DVD for a long time and only watched it once a few years back and wasn’t blown away by it; after rewatching it the other night it still isn’t much better. It is a little more interesting viewing this since 2020 with all the conspiracy theories going around so there isn’t much that’s hard to believe when the authorities say there had been landslides or car wrecks rather than a deadly virus.

In terms of action there are a few fight scenes, shoot-outs and explosions which keeps things moving; there is also an impressive stunt which is a definite highlight and it has someone dangling off a truck as it hangs on a cliff which was awesome.  We also get to see The Boz running from an explosion in slow motion which never gets old.

The ending is a real letdown feeling rushed with no big set-piece so it just fizzles out leaving you thinking is that it?; compared to Bosworth’s Stone Cold or One Tough Bastard this is a rather bland affair and one you can avoid unless you are a Boz completist.

Overall, Virus has some decent action scenes but nothing spectacular and you’ll struggle to remember it once the end credits roll; Brian Bosworth is as awesome as ever and it’s always fun watching him beat up the bad guys but just don’t expect anything as good as Stone Cold which remains his best film.