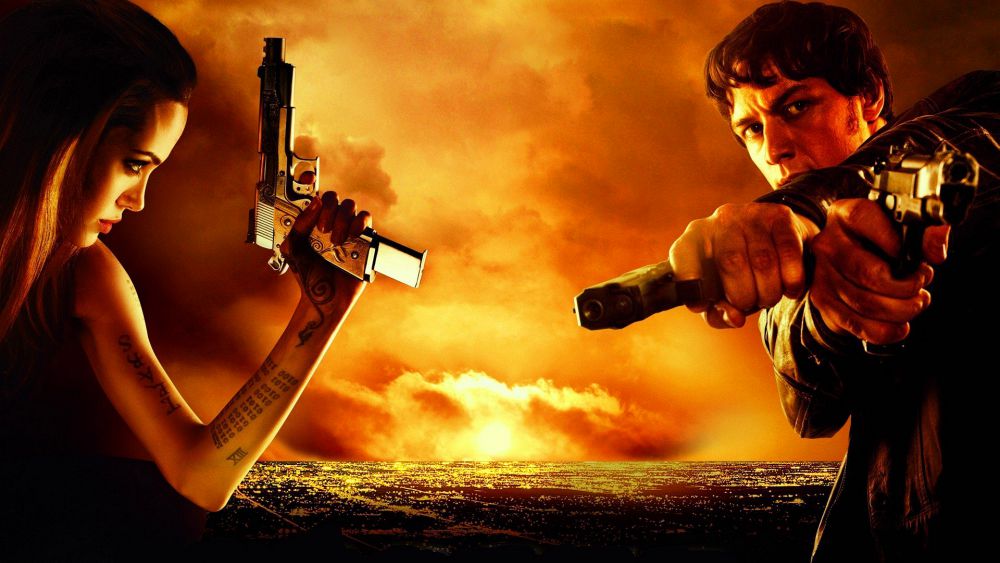 Wanted is one of the best action movies of the year and I still hope that we get to see a sequel one of these days; I want to see where Wesley goes next in his new line of work.

Plot: A frustrated office worker learns that he is the son of a professional assassin, and that he shares his father’s superhuman killing abilities.

Review:Here’s a movie that doesn’t get nearly enough love. It’s actually one of my favourite movies frome the past 10 years but it’s largely forgotten about. James McAvoy is fantastic as Wesley, a guy like the rest of us stuck in a cubicle doing a tedious desk job. Then one day a stunning woman who looks remarkably like Angelina Jolie tells him his father was one of the world’s greatest assassins and that he also has it in him to be one of the best.

So begins Wesley’s journey from bored office worker to badass hit man and the movie kinda becomes wish fulfillment for those of us who wish their lives were more exciting.

There are several moments which are just pure cinematic euphoria like Wesley telling his boss to go f**k herself, then hitting his “friend” in the face with the keyboard; the keys spell out fu**k you in a wonderful piece of dark humour. We’ve all had jobs like that where we want to tell people exactly where to go, but in reality you’d just end up in more trouble.

Wanted is brutally violent in places, especially with Wesley’s training where he gets the living hell beaten out of him, but his transformation from boredom to badass is awesome. It also has the best last line of any movie in the last 10 years.

Yes, there is a load of action in the movie and it’s all spectacular but if you look through it all, it’s really about your life and how it is what you make it, so go out and make it better.

Angelina is fantastic and this is one of my favourite roles for her despite the fact I normally find her very cold and unlikable. In this she is sexy, yet nasty at the same time. You’re never sure if she is a good guy or villain when she’s really a bit of both.

You’ve also got Morgan Freeman who plays a rare villain and you’ve got yourself a winning combination for an awesome action movie.

Sure it’s ridiculous, especially the whole loom idea but it’s a movie, that’s what movies are for, escapism and that’s exactly what this is.

Overall, Wanted is one of the best action movies of the year and I still hope that we get to see a sequel one of these days; I want to see where Wesley goes next in his new line of work.