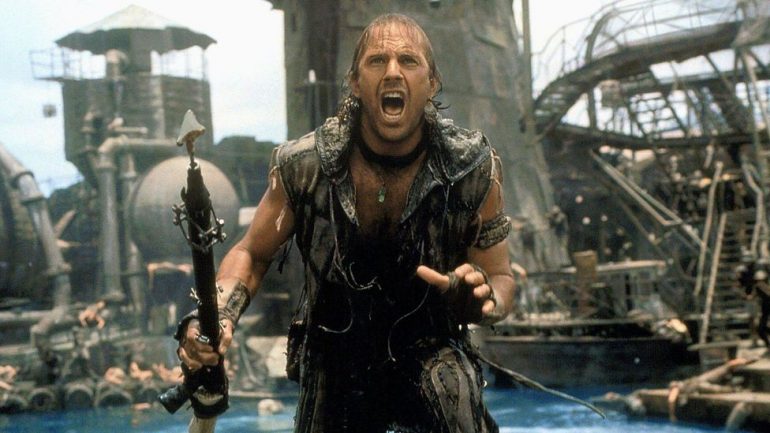 Waterworld is a fun movie with some spectacular action scenes and Dennis Hopper on fine villainous form; the 3 hour cut certainly is long but it gives the characters added depth and the picture/sound are decent. It’s too bad there are no other special features so I recommend sticking with the Arrow Blu-ray instead.

Plot: After the melting of the polar ice caps, most of the globe is underwater. Some humans have survived, and even fewer still, notably the Mariner (Kevin Costner), have adapted to the ocean by developing gills. A loner by nature, the Mariner reluctantly befriends Helen (Jeanne Tripplehorn) and her young companion, Enola (Tina Majorino), as they escape from a hostile artificial island. Soon the sinister Smokers are pursuing them in the belief that Enola holds the key to finding the mythical Dryland.

Review: I’d only ever seen Waterworld once in the theatre when it first came out; billed as being cinema’s biggest flop (like Cutthroat Island) everyone seemed to hate the movie before it even came out just because of the spiraling budget (and Kevin Costner’s ego apparently). I remember quite enjoying the Mad Max on the water scenario but never really had any great inkling to watch it again until I saw the 4K release for $15 on Amazon recently.

This has the extended cut which has a whopping 40 extra minutes making the movie nearly 3 hours long. This really adds more depth to the characters especially Dennis Hopper’s Deacon who is far more interesting now and more of a leader rather than just the “bad guy”; I also never noticed that was Jack Black as the plane pilot before.

At the time I thought Costner’s Mariner was a bit too surly of a character making him very hard to root for; this extended cut only adds that making him really come across as a total asshole however, obviously it’s called character development as he grows fonder of Enola and Helen so as the story progresses we still root for him.

My favourite scene is towards the end when the Mariner goes to rescue Enola from Deacon and while he is taking out the trash she provides the “how badass is this guy” voiceover saying “He doesn’t have a home or people to care for. He’s not afraid of anything, men least of all. He’s fast and strong like a big wind. He can hear a hundred miles, and see a hundred miles underwater. He can hide in the shadow of a noon sun. He can be right behind you and you won’t even know it til you’re dead!” I would love someone to say something as cool as that about me rather than “he’s quite dull and not that bright” which is less exciting.

Anyway, I forgot just how spectacular this film is in terms of action sequences; there is a real sense of scale with incredible stunts, explosions and battles where you see every penny of the budget on screen. The odd special effect doesn’t hold up but there’s nothing overly jarring and for the most part it still looks fantastic.

James Newton Howard’s score is one of his best with the Mariner getting a heroic theme and we also get some epic choirs during the action scenes.

The 3 hour runtime is definitely a bit too long and it does drag at times so I understand why it was trimmed for the theatrical release but this is still worth watching; the audio and visuals are nicely remastered however, there were a few grainy scenes.

Alas like the Mad Max 4k Anthology aside from two alternate cuts of Waterworld there are no other special features so if you already own the Arrow Blu-ray then this isn’t really worth picking up.

Overall, Waterworld is a technical marvel with some jaw dropping set-pieces and a genuine sense of scale; having two versions of the film is fantastic but aside from that though there are no other special features so you’re best to stick with the Arrow release.