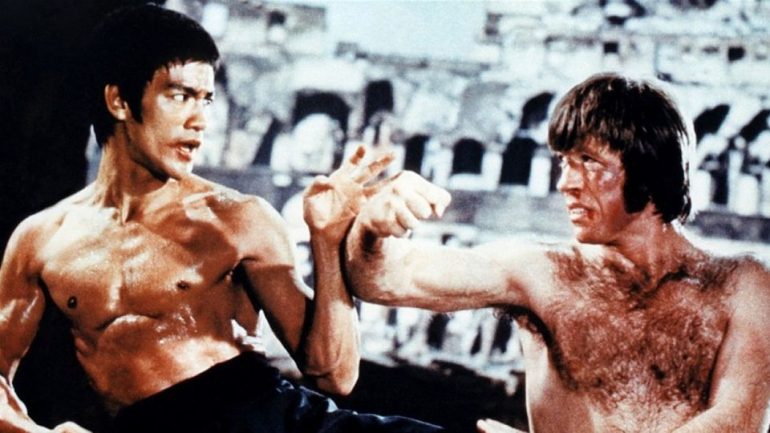 Way of the Dragon could probably could have done with cutting a couple of scenes as we don’t really need various sight seeing trips! We wanna see people getting beat up. Basically fast forward the first half hour and you’ve got yourself an ass kicking good time.

Plot: A man visits his relatives at their restaurant in Italy and has to help them defend against brutal gangsters harassing them.

Review: Even after all these years Bruce Lee remains one of the all time great martial arts legends. There are few on screen who can match the sheer speed and ferocity of his kicks or capture the imagination of the public the way he did.

The thing is he was just so likable on screen, when he smiled his face lit up and when he fought you wouldn’t want to get in his way.

I’m always filled with sadness when I watch his films as it was such a tragedy that he was taken so soon, the same for his son Brandon. But their legacy will never be forgotten.

Way of the Dragon takes a while to get going, in fact it takes 30 minutes before anything actually happens; it’s like it’s teasing you. You know he can fight, you know it’s gonna be awesome… but you just have to wait. Then at pretty much exactly 30 minutes in Bruce gets to kick some ass and all the CGI in the world today will never be as thrilling to watch.

The first fight scene is Lee defending his new friends from a group of thugs intent on taking over his Uncle’s restaurant. It’s quite brief yet awesome, but it’s the next fight which is truly spectacular. He takes out the nun-chucks and beats the living snot out of the next group of thugs and it remains one of the best fight scenes I’ve ever seen.

There are a few more fights but then some guy appears towards the end and Bruce fights him but dare we speak his name? It’s only Chuck F**king Norris! Arguably the best fight scene Norris has ever done as he displays genuine skill and he could really move in his younger days.

He gets to play a villain for the one and only time in his career I believe. He doesn’t say much but he lets his fists and feet do the talking. The fight between Norris and Lee lasts about 15 minutes and is brutal and exciting. You rarely see Norris get his ass handed to him so it’s extremely satisfying.

The dubbing in the version I’ve seen is truly hilarious in places and the music is annoying as that tune sticks in your head for ages. The overly gay villain is a bit irritating and not even remotely threatening, but Norris manages to provide the threat quite easily.

Overall, Way of the Dragon could probably could have done with cutting a couple of scenes as we don’t really need various sight seeing trips! We wanna see people getting beat up. Basically fast forward the first half hour and you’ve got yourself an ass kicking good time. Essential for kung fu/Norris and Bruce Lee fans.