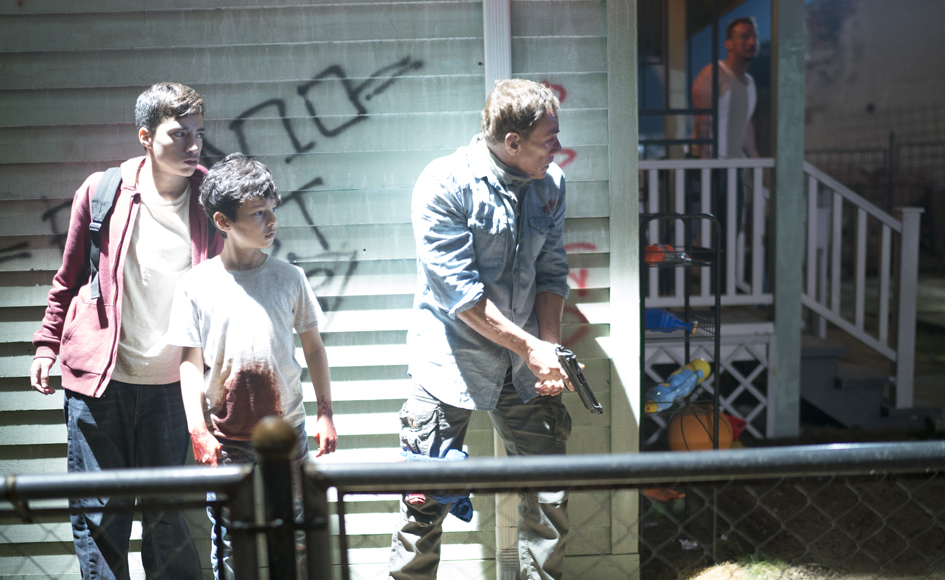 We Die Young may not be as action packed as you’d want from a Van Damme flick but it has an engaging story and characters who we truly care about. JCVD gives one of his best performances to date as the tortured Daniel and David Castañeda is magnetic on screen as Rincon making this worth watching.

Plot: Lucas, a 14-year-old boy inducted into the gang life in Washington, D.C., is determined that his 10-year-old brother won’t follow the same path. When an Afghanistan war veteran comes into the neighborhood, an opportunity arises.

Review: I am now back from vacation so time to catch up with some reviews and articles; first up is Jean-Claude Van Damme’s latest movie We Die Young which shows us JCVD as we haven’t really seen him before.

In We Die Young Van Damme plays a junkie called Daniel who is a former soldier with PTSD; his throat is damaged so he can no longer speak and he uses a phone to communicate what he is trying to say. This is quite a different role for Jean-Claude and yes we’ve seen him play the world weary character in essentially all of his movies for the past 15 years but there’s something different about Daniel.

He’s a rather pathetic character who is just trying to keep his trauma and pain under control and local drug dealer Rincon supplies him with what he needs using young Lucas (Elijah Rodriguez) as his mule to deliver the goods. One day when Lucas finds his young brother working for Rincon things rapidly spiral out of control as Lucas only wants his young brother to be safe.

If you go to IMDB you’ll see that this is classed as a drama and not actually an action movie and I’d say that’s pretty spot on; there is little in the way of action in We Die young (at least for the first half) and it’s more of a character piece. If you’re looking for Van Damme having fight scenes and kicking ass then you’ll be disappointed however, that’s not to say there isn’t plenty to keep you interested and the final 20 minutes is a satisfyingly bullet riddled climax.

I found Miguel (Nicholas Sean Johnny) rather annoying and never really sympathised for him but Lucas’ dedication to his brother and keeping him safe was admirable and had you rooting for them. They are the true protagonists to the movie with Van Damme really more of a supporting character.

David Castañeda was arguably the my favourite character as the drug lord Rincon who you are expecting to be a one note monster but he is far from it; he is really a father figure to Lucas and he is also dedicated to his family especially his disabled sister who is about to get married. Although you have an idea which way the story is going to go it will still have you on the edge of your seat as there are plenty of knuckle chewing moments of tension with Rincon’s right hand man Jester (Charlie MacGechan) proving suitably menacing.

It was an interesting touch to have the movie set in Washington DC’s ghetto as that’s not something we get to see too often in movies and it shines a light on the frankly terrifying world of gangs and drugs.

Overall, at 90 minutes long We Die Young is well paced and never dull giving us time to get to know each of the main characters while telling an engaging and tension-filled story. It may not be the type of Van Damme movie we’re used to but he is still incredibly sympathetic in one of his most daring roles to date.