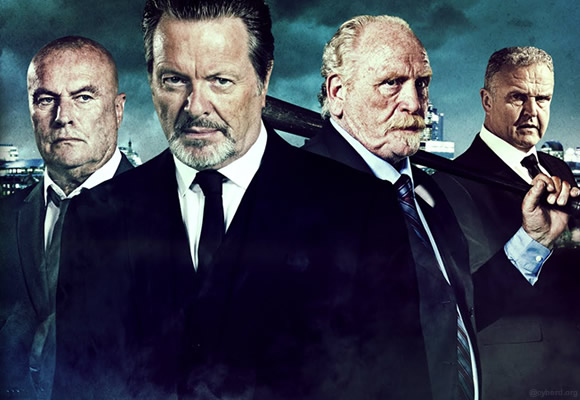 We Still Kill the Old Way is incredibly enjoyable and certainly a better “Old People Kicking Ass” movie than the most recent Expendables outing.

Plot: A group of aging London gangsters go on a vigilante killing spree when one of their number is murdered by a street gang.

Review: I’ve been looking to this movie for a while; after the rather excellent Vendetta from last year I was hoping this would be equally as hardcore and it didn’t disappoint.

We Still Kill the Old Way is definitely worth the wait and any movie involving chavs, NEDs or hoodies getting tortured and killed is already a must watch in my book.

This movie builds everything up to perfection, introducing us to our anti-heroes who are retired former gangsters led by the impossibly cool Richie (Ian Ogilvy); there is literally nobody cooler than this man.

He swaggers on screen with a quiet calm which hides the fact that this man is a vicious killer when provoked. When his brother is murdered by some hoodie wearing scumbags, it’s time to take out the trash. He gets his old team together and despite being a bit creaky they still know how to deliver the pain.

James Cosmo nearly steals the movie as Arthur who keeps shouting at random moments, which provides some  levity but you’re also rather terrified of him at the same time.

It’s great to see Alison Doody (Indiana Jones and the Last Crusade) have a major role in this movie as I haven’t seen her in much since and she still looks gorgeous too.

The acting in general is spot on with plenty of dark humour; this isn’t quite as vicious a film as Vendetta with a lot of the violence happening off screen, but there are a few scenes which will make you squirm. The murder of Charlie (Steven Berkoff) is pretty brutal and by the time it’s done you are ready for Aaron (Danny-Boy Hatchard) and his buddies to get destroyed.

Aaron is a cowardly piece of shit in this movie; when Charlie challenges him to a fight, he steps back like a little bitch and lets his boys do his dirty work for him. Danny-Boy Hatchard is so good as Aaron that I never want to meet him in real life, even his voice pisses me off.

When these chavs start getting tortured and killed, that’s when the movie becomes total wish-fulfilment and you will happily watch them get torn to pieces without batting an eye lid.

You totally root for the older gentlemen gangsters as they feel like real characters that live by a code of honour and respect.

My main flaw with the movie is that it’s all over too fast and goes a bit cartoony at the end in the hospital. It builds up so much for the first half but frankly not enough chavs got tortured for my liking… but I may have issues.

Overall, We Still Kill the Old Way is incredibly enjoyable and certainly a better “Old People Kicking Ass” movie than the most recent Expendables outing. It’s a welcome return for Ian Ogilvy and if you’re looking for a satisfying revenge flick then grab a few beers and have a blast.