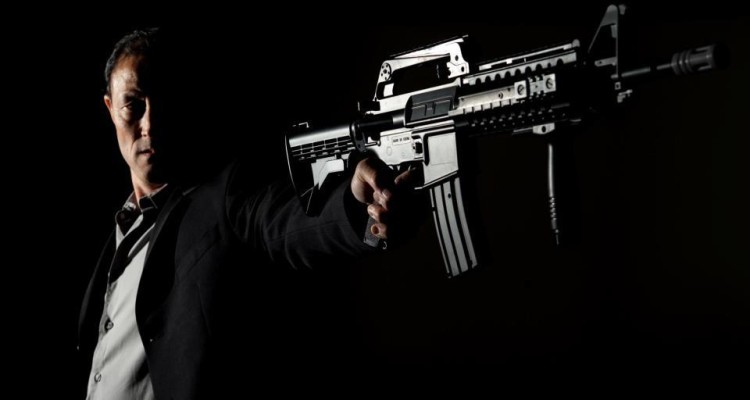 Weapon of Choice makes the most of its low budget with some great fight scenes, a memorable villain and a cool hero. It’s just a shame about the romantic sub-plot in the middle which slows it down a bit. Nothing major though and definitely worth a watch.

Plot: Jack Lee is a weapons master who knows whether you live or die depends on your weapon of choice. He needs to take action before his niece Jaime is lost forever.

Review: Weapon of Choice is a low budget action movie from directors Jino Kang and Tony Urgo. What it lacks in budget, it more than makes for in excellent fight scenes and a badass hero.

Jino Kang not only wrote and directed the movie but he also stars as Jack lee, our protagonist; a man of few words but he does have a particular set of skills, which makes him a deadly opponent.

Jack is incredibly cool and a very sympathetic anti-hero; yes, he’s an assassin but he’s tried to do his best to raise his niece Jaime Lee (Kelly Lou Dennis). When she is taken from him, it’s up to him to get her back… no matter what.

As with any good action movie though, I’m afraid it is owned by the villain Douglas Olsson who plays Michael Banducci. He has all the best lines and is one of the most likeable bad guys I’ve seen for a while. He actually doesn’t do that much in terms of being evil; he doesn’t shoot his own men or anything like that so you don’t really hate him. “Get a yacht… a smaller yacht” was one of my favourite lines which he delivers in a cool dry fashion and made me almost want him to get away with it in the end.

Katherine Celio is rather gorgeous as cop/sidekick to Jack Ashlie (Ash) Jordan; she has a few moves and has some great fights with some goons towards the end, especially outside their farmhouse.

There is a bit of a pacing lag in the mid-section though and it got a little slow; I can never really be bothered with romantic moments in action movies, just get to the neck breaking.

The last 20 minutes is where it really kicks into high gear though with Jack going into one man army mode and there are some jaw-dropping fights. We get swords, fists, guns and limbs being severed all to a pumping electric guitar flavoured music score. It’s essentially old-school action at its best.

What I like about the fights is that they aren’t over stylized but feel more authentic; anyone who has been in a real fight knows that there are no flashy moves, it’s just you desperately trying to take down the other guy and that’s what we get here.

Overall, Weapon of Choice makes the most of its low budget with some great fight scenes, a memorable villain and a cool hero. It’s just a shame about the romantic sub-plot in the middle which slows it down a bit. Nothing major though and definitely worth a watch.