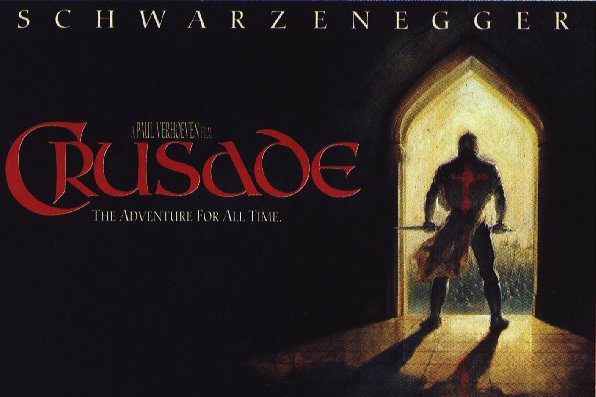 Whatever Happened to Arnie’s “Crusade” Movie?

Well I thought I’d take a look into why it never happened, which I’m sure you already know.

Anyway, Empire did a piece on the project a couple of years ago but I didn’t see it until just now.

They said the Crusades movie had been described as by some as “part Spartacus, part Conan” and was to be directed by the legendary Paul Verhoeven.

Empire described the film as “full-on, frank, vintage Verhoeven, with sets already built in Spain and cast ready to roll – including Robert Duvall, Jennifer Connelly, John Turturro, and Christopher McDonald – before it all disappeared into a lick of development hellfire”.

So what the Hell happened? Arnie discussed the project and said “it was all written and ready to go but then Paul started going crazy. We had the final meeting with the studio and we were all sitting at this boardroom table. They said, ‘So the budget is $100 million. That’s a lot of money. What kind of guarantees do you have that we will get it for 100 and it won’t go up to 130?'”

“He says, ‘What do you mean, guarantees’?” booms Schwarzenegger, imitating the Dutch firebrand auteur. “There’s no such thing as guarantees! Guarantees don’t happen and if anyone promises you guarantees, they’re lying! We don’t even know that if you want out of the building here you won’t get hit by a truck. There’s no guarantee that we’re going to make it ’til tomorrow! I cannot have control over God – I don’t even believe in God, why am I talking about God? But someone, nature, could just rain for three months and then what do we do? How can I give you a guarantee? This is ludicrous!”

“I kept kicking him under the table and trying to tell him to shut up while we’re ahead,” Arnie adds. “But he just wouldn’t, and that was it. That was the end of that movie. Paul always tried to be honest, but you can be a little bit selective about when to be honest and when to just move on with the project. It was a shame.”

That is a damn shame indeed; it had a great cast attached and could have become a bit of a classic.

I suppose the movie was eventually made as Kingdom of Heaven but the biggest flaw with that movie is that it felt a little too safe. It felt like the studio didn’t want to offend anyone so they made everyone in the movie seem really nice and quite reluctant to fight a war. The director’s cut was a far superior version but even then you never really felt anything when watching it.

If Arnold had starred in it with Paul Verhoeven directing I imagine they would have had violence galore and offended everyone on the planet… which is far more interesting.

I really miss Paul Verhoeven from Hollywood as he’s the kind of director we just don’t get anymore. He didn’t give a shit what anyone said and wanted to things his way and that’s just fine by me.

Sadly, his not giving a shit is also the reason the movie never saw the light of day.