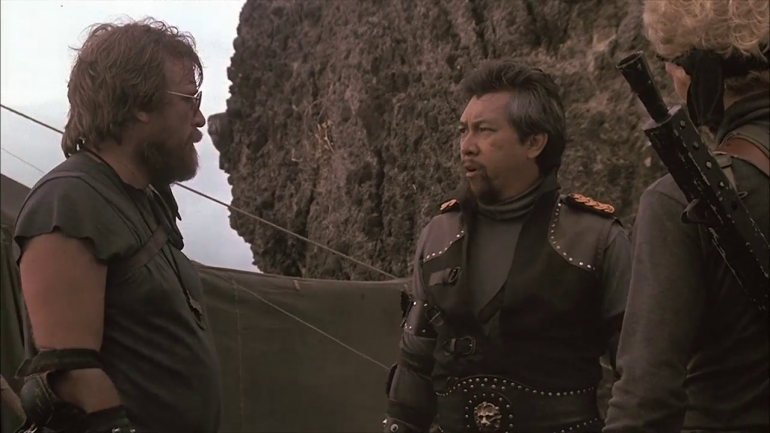 Wheels of Fire is a cheap exploitation movie that doesn’t pretend to hide the fact it’s a blatant rip-off of Mad Max but it’s pretty much my favourite genre.

Plot: The Future is now. There are no rules and no place to hide from the deadly Highway Warriors who ravage the roads in machines of destruction.

Review: Wheels of Fire is essentially a cheap rip-off of Mad Max which happened a lot throughout the 80’s. From director Cirio H. Santiago (Firecracker, Silk, Bloodfist 2050 and more) Wheels of Fire is far more entertaining than it has any right to be mostly due to the constant action.

There is basically no plot to speak of other than a cool mysterious stranger called Trace (Gary Watkins) appears at a post-apocalyptic camp to meet his sister Arlee (Lynda Weismeier) and her new boyfriend Bo (Steve Parvin).

Things seem pretty nice until shit decides to hit the fan and Arlee is kidnapped by a villainous gang led by Scourge (Joe Mari Avellana); she is basically gang raped (which we never see thankfully) and Trace eventually decides to go and save her. It really does take him a while to get around to it as he goes to another camp and hangs out with some crazed hippies who are building a rocket ship so they can fly into space and live happily ever after… or something.

So yeah, the story is bollocks but there are some awesome Mad Max style cars and action sequences but I think we can all agree that the best thing about the movie is Trace’s car as it is armed with a flame thrower. He kills dozens of bad guys with it which makes the film pretty entertaining and helps you get over the rotten acting and dialogue.

Trace is also a pretty cool protagonist who is a man of few words and prefers to let his flamethrower do all the talking which is totally understandable.

Overall, Wheels of Fire is a cheap exploitation movie that doesn’t pretend to hide the fact it’s a blatant rip-off of Mad Max but it’s pretty much my favourite genre so if you haven’t seen it then it’s out on Blu-ray now courtesy of Code Red.