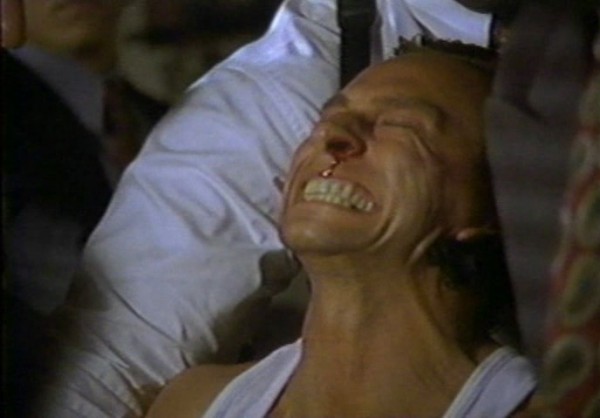 When the Bullet Hits the Bone is rather disappointing and not up there with Jeff’s best work. He does what he can though but the directing could have been a lot better.

Plot: Thirteen Years in the emergency room, seeing people die from drugs and drug-related crime, have made Dr. Jack Davies angry and desperate. One day he stumbles drunken through the back streets of the city, and into a quarrel between drug baron Turner’s girl and some of his thugs. He gets gunned down but survives, and now it’s war. Watch our hero expose and break up an amazing conspiracy, while taking more pain than Rambo or Rocky ever did.

Review: Jeff Wincott stars in this low budget action thriller, but sadly he doesn’t kick any ass in it; from the synopsis I was expecting him to go all Charles Bronson in it but he really doesn’t.

There are no fight scenes and very little in the way of action. The bad guys are particularly cruel and I never felt like they got what they deserved.

Daemon (Roy Lewis) is particularly sadistic and I was disappointed he only got shot; he deserved a Universal Soldier type demise. I enjoyed how he would grill his victims about the history of the US, like “Who was the shortest President?” before executing them. He is a nasty piece of work so you really wanted to watch him suffer at the end.

There’s nothing wrong performance wise and Jeff elevates the movie playing Dr. Jack Davies as a man who has just had enough and desperately wants to change things. This is from 1996 so it was approaching the end of Jeff’s martial arts movies and is more of a drama/thriller.

There is plenty of violence though and a few tough torture scenes too; the scalpel under the finger nails looked particularly painful.

The story is pretty dark and I liked that it was something a little different; it was pretty well paced and although there wasn’t much in the way of action, there still managed to be an air of threat.

You may recognize Richard Fitzpatrick who plays the corrupt Senator Striker as he played the bad guy from No Exit too. He’s always great at being smug but is another character who doesn’t get what he deserves at the end, however upon thinking about it, that’s what makes this a bit more realistic.

The biggest flaw of the film is something utterly amateurish; you can actually see the boom mic at several points; keep your eyes open at the 1 hour 2 minutes mark and you’ll see it at the top of screen. It doesn’t matter how low budget your film is, that’s pretty basic stuff.

Overall, When the Bullet Hits the Bone is rather disappointing and not up there with Jeff’s best work. He does what he can though but the directing could have been a lot better. For completists only.