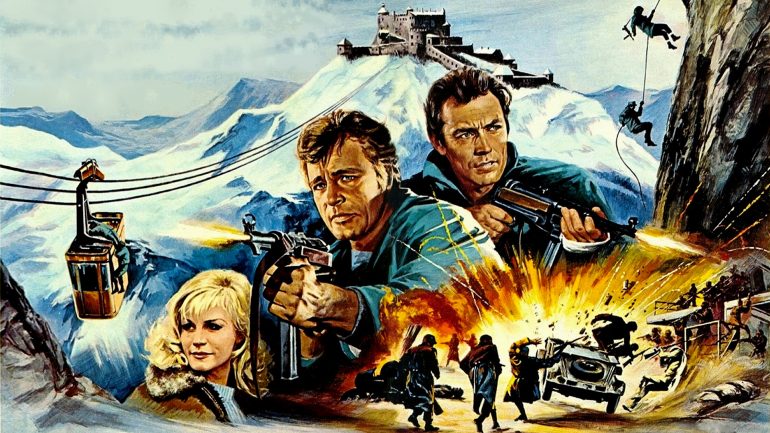 Where Eagles Dare is essential to anyone’s DVD collection and still stands up today as a tense and exciting action classic.

Plot: Allied agents stage a daring raid on a castle where the Nazis are holding an American General prisoner… but that’s not all that’s really going on.

Review: I’ve said it before and I’ll say it again, imagine if The Expendables movies were done like this. Where they had actual tension, a great story but still had plenty of  explosions to keep everyone entertained.

This is one of the best “Men on a Mission” movies of all time and is so influential that people still copy it today (Inglourious Basterds). Clint Eastwood has one of his coolest roles as an American soldier working with British soldiers to rescue a prisoner in Germany.

What ensues is over 2 hours of nail biting tension and fantastic set-pieces. The fight on top of the cable car in the second half remains extremely satisfying and the whole final hour is non-stop action. There is the odd dodgy blue screen moment, but hey, it was 1968 so we can cut them some slack.

Richard Burton’s character Major Smith is unpredictable up until the end and you wonder whose side he’s really on. There are so many twists and turns that keep you guessing and it’s no winder the film is so influential.

Of all the Nazi characters it’s Derren Nesbitt’s Gestapo Agent Von Hapen who really stands out, with his Aryan blond hair; he just looks like an authentic Nazi and I think he was a big influence on Christoph Waltz’s character in Inglourious Basterds.

The first hour of the movie sets up the story/characters and the pacing may not be for everyone, but trust me, stick with it and you’ll be rewarded with one of the best action movies of all time.

Overall, Where Eagles Dare is essential to anyone’s DVD collection and still stands up today as a tense and exciting action classic.