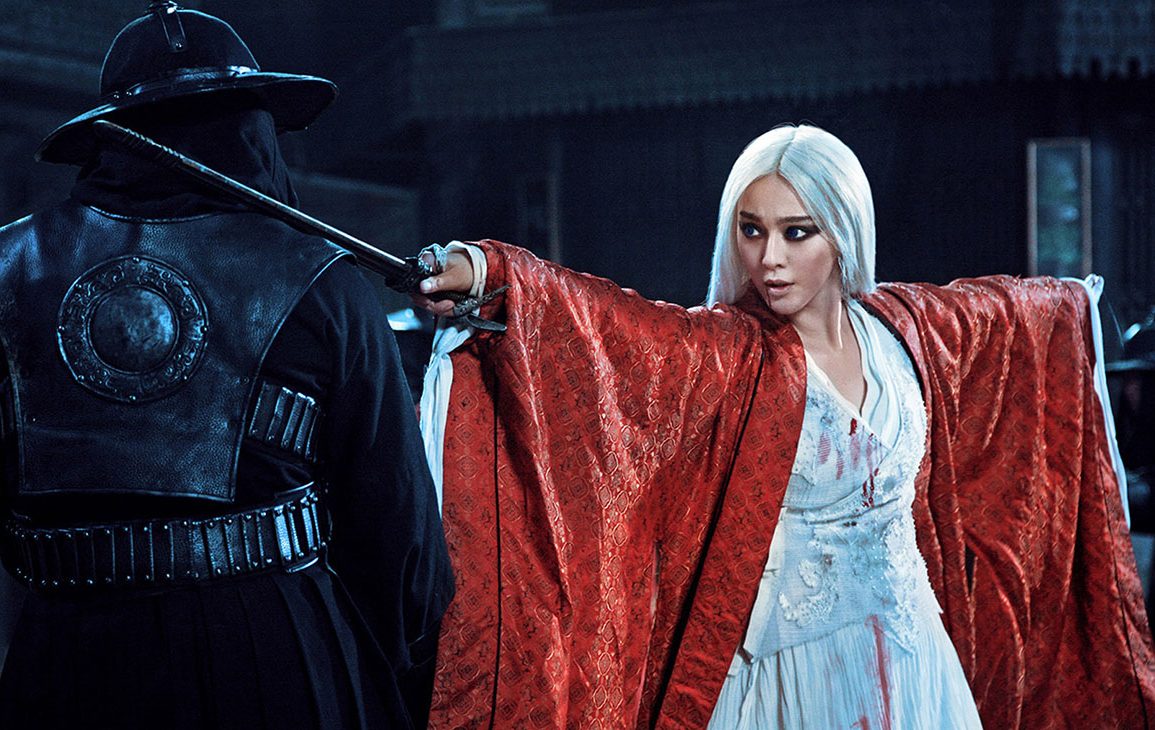 White Haired Witch isn’t a perfect film; it has a frustrating ending and some ropey effects but the acting is decent and there is the odd nice visual with plenty of action to keep you entertained.

Plot: In the twilight of the Ming Dynasty, the Imperial court is plagued by corruption as tyrants rule over the land. With the Manchurians preying on a weakened empire, war is imminent. To save the victims from their suffering, sorceress Jade Raksha fights the soldiers who oppress people for their own gain. As payback, local government officials decide to pin the murder of Governor Zhuo Zhonglian on Jade, turning her and the members of her cult into wanted fugitives for a crime they didn’t commit.

Review: White Haired Witch is an adaptation of a novel Baifa Monü Zhuan from 1957; it’s had several film incarnations including The Bride with White Hair (1993) and The Romance of the White Hair Maiden (1995).

This most recent adaptation sure has a lot of CG but I can’t deny that some of the visuals are rather breathtaking. I think it would have looked better in 3D but the Blu-ray is one of the best quality I’ve ever seen; perfect picture and sound. It’s a shame that the Lunar Kingdom itself looks like a set and isn’t very convincing but there are some moments which look literally fantastic.

Personally, I’ve never read the original novel so I am basing this review merely on the quality of the film; it didn’t get great reviews when it came out in China but I thoroughly enjoyed it despite its flaws.

From research I’ve done about the book, it sounds like the story has much more to it and the film could have done with being a little longer.

The story has several twists and turns and surprisingly didn’t go the way I suspected, but I have to say that I hated the ending. It happened far too quickly and I wish that they had included more from the book as it would have been far more satisfying.

Fan Bing Bing looks radiant as the White Haired Witch AKA Lian Nishang; she is just the right amount of strong and vulnerable. Her late master taught her that “love is the deadliest poison” however; when Lian meets Zhuo Yihang (Xiaoming Huang) she begins to see that it’s not so easy to define love.

Xiaoming Huang is instantly likeable and shows that Zhuo is clearly a man of honour; when he is set up for the murder of the Emperor he doesn’t know who to trust and things go awry very quickly.

There is plenty of wuxia action so expect wirework and impossible feats galore; for once it didn’t really bother me because this is purely a fantasy movie and wasn’t going for realism.

For the most part it succeeds in creating this other world but you can’t help feeling that they spent more time on the special effects rather than a complete story.

The music score was nice but the song over the finale was incredibly lame and was another reason the ending bugged me.

Overall, White Haired Witch isn’t a perfect film; it has a frustrating ending and some ropey effects but the acting is decent and there is the odd nice visual with plenty of action to keep you entertained.