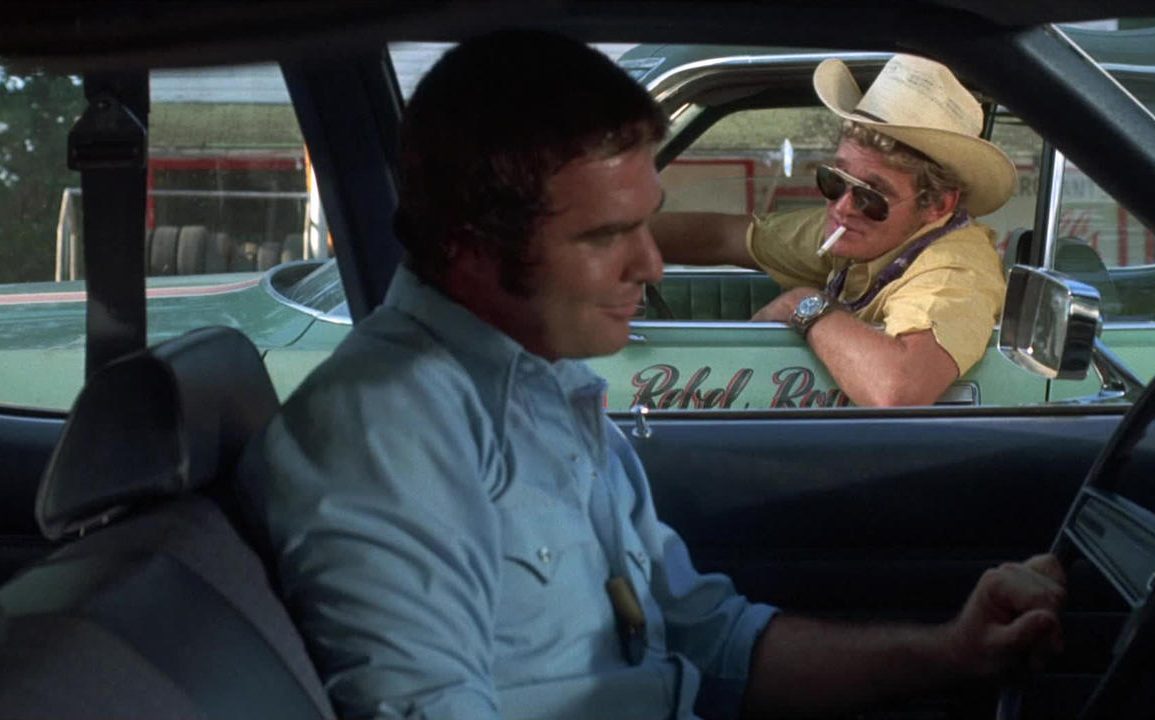 Any movie where the protagonist is called Gator McClusky is worth watching in my book but when Gator is played by one Burt Reynolds, well that’s just a must-see. White Lightning is the type of movie that just wouldn’t get made today; rednecks are essentially the heroes, there’s some casual racism and the cops are the real crooks.

When Gator finds out a Sheriff in Baton County killed his brother he makes a deal with FBI to take him down so he is released early from prison and gets to work.

Although the (admittedly awesome) artwork would have you believe there is constant action there isn’t really but there are some spectacular car chases and one brief fight scene. It is still pretty tense and exciting at times as Gator tries to out maneuver the cops and Ned Beatty is suitably despicable as the corrupt Sheriff J.C. Connors.

I love 70’s car movies and White Lighting is one of my favourites; Gator drives a 1971 Ford Galaxie Custom 500 which may be a horrible brown colour but it sure is fast and helps him in transporting his illegal liquor while evading the cops.

You can practically feel the heat in every scene as everyone looks drenched in sweat; the swamp locations themselves have a real sense of threat particularly after the opening murder scene which is quite shocking. You can so easily be made to disappear and you’re lucky if you are ever found.

Reynolds remains one of the coolest men in cinema and Gator is one of his best characters; he has the gift of the gab and the ladies love him. He’s not just there to look cool though; he is out for revenge for his murdered brother and when we find out why he was killed it just adds to the tragedy. Gator gives a moving speech at the end where he talks about how his brother made something of himself and didn’t deserve what happened. It feels authentic and there isn’t anything that especially stretched credibility with the story.

I love the characters too like Dude, Roy and Skeeter; just great names giving it all more personality. These men aren’t painted like stereotypical hicks but people trying to make a living with a code and sense of honour. I liked how Gator is a little different and can’t even help himself when it comes to the ladies… even if they are already with one of his friends.

I find it hard to believe this movie is rated PG due to the subject matter and the content of certain scenes but I wonder if it did get made today would it be rated R?

The music is all twangy guitars and gives a sense of fun to the chase scenes so by the end, you’ll possibly feel more attracted to your cousins… maybe.

Anyway, White Lightning is a classic car movie with memorable characters, awesome car chases and Burt Reynolds at his coolest. If you haven’t seen it then it’s worth picking up.