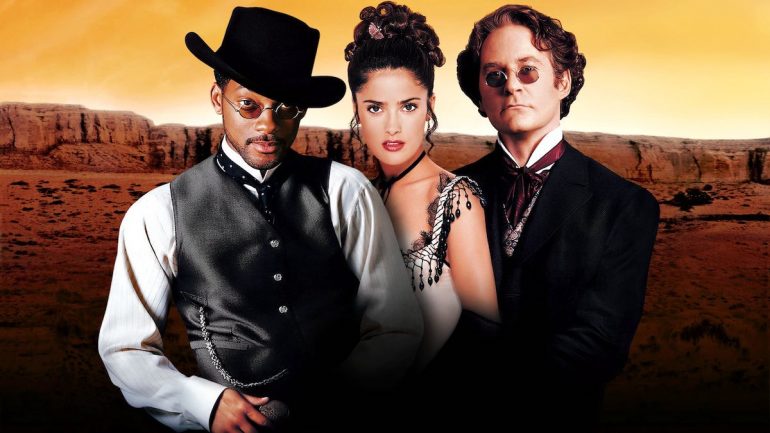 Wild Wild West isn’t a good film by any stretch of the imagination with Will Smith playing the same role he always does but Kevin Kline provides a few laughs and Salma Hayek never disappoints.

Plot: When President Ulysses S. Grant (Kevin Kline) learns that diabolical inventor Dr. Arliss Loveless (Kenneth Branagh) is planning to assassinate him, he orders Civil War hero James West (Will Smith) and U.S. Marshal Artemus Gordon (also Kline) to arrest him. West’s trigger-happy personality doesn’t always mesh well with that of the thoughtful Gordon, but they manage to work together. And with the help of a mysterious stranger (Salma Hayek), West and Gordon close in on Loveless.

Review: I had deliberately never watched Wild Wild West before until this week; the trailers alone looked horrible and any scenes I had viewed in passing were equally as bad. I’ve also somehow not seen the original series (starring Robert Conrad) this is based on so I’m judging it just as a movie in its own right.

After finally viewing Wild Wild West I don’t hate the movie as much as I expected as I think it’s lighthearted enough with a few enjoyable moments and set-pieces but generally it’s a big disappointment considering the talent involved.

Riding high after the success of Men in Black Will Smith reteams with director Barry Sonnenfield but with less successful results. Smith turned down the lead in The Matrix for this movie and would later state it was the worst decision of his life… and he wasn’t wrong.

The script is mostly dire featuring Will Smith at this Will Smith-iest; he isn’t particularly funny in it and I thought Kevin Kline was the shining light of the film as was Salma Hayek by her mere presence.

Kenneth Branagh seems to be enjoying himself as the over-the-top villain Dr. Arliss Loveless who wants to break up the United States and take over with the help of a ridiculously huge steampunk spider. A lot of the visual effects don’t hold up with obvious green screen moments, but I do enjoy all things steampunk so there some inventive creations which was my favourite aspect of the entire film.

I also loved Elmer Bernstein’s score which felt like a nice throwback to his Magnificent Seven music; it’s rousing Western fare that elevates the action scenes, of which there are many. We get a few punch ups and explosions and it’s well enough paced rarely slowing down.

The always reliable Ted Levine shows up as another antagonist called General McGrath who is killed off rather early on which is a shame as he was a bit more interesting and intimidating than Loveless.

Smith and Kline try the best with the material but they don’t have the same chemistry of Smith and Tommy Lee Jones in Men in Black. Both are game showing up in drag at various points which did provide a few laughs but it just wasn’t as funny as it should have been.

I wouldn’t be surprised if this is on a few people’s guilty pleasure lists as that’s exactly what it is but there were some strange choices made with this movie. Star of the original series Robert Conrad apparently hated what they did with this movie (even showing up to collect a few of the many Razzie’s it was nominated for) and it’s easy to see why.

Overall, Wild Wild West has its moments and is harmless fun with a jaunty music score but the script really lets it down and it’s so preposterous that it’s not something I would watch regularly.