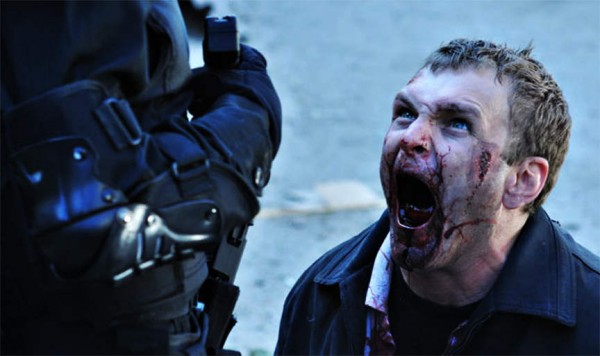 Will We Ever See Re-Kill or A Man Shall Rise?

You may remember a few years ago Scott Adkins starred in a zombie movie called Re-Kill. The story is as follows: “It’s been 5 years since the outbreak that wiped out 85% of the world’s population, but the war between Re-Animates (Re-Ans) and Humans wages on. Most of the major cities are still uninhabitable. Within the few surviving cities, the Re-Ans have been segregated into “zones” and are policed by the R-Division of the QUASI S.W.A.T. Unit who hunt to re-kill the Re-Ans in the hope of quelling a second outbreak.”

So far, so cool right? But this movie was meant to be out in 2011, then got moved to 2012 and eventually got picked up by After Dark Films… then it didn’t and disappeared once again. There were rumours that it would get an international release this year with a name change to Re-Loaded, but once again, nothing concrete.

According to Shocktillyoudrop: “We’ve learned the film’s delay has been attributed to the schedules of both director Valerie Milev – who was pulled away to film Code Red – and Courtney Solomon who went to direct the film Getaway with Ethan Hawke, Selena Gomez and Jon Voight.

While Milev is credited with directing the film, Solomon has had a heavy hand in the production and Re-Kill is being considered a “collaborative” effort. This process got interrupted during post-production while both went off to shoot other project”.

When we spoke with Scott Adkins a few weeks ago, he said that “I’d forgotten about that, thanks for reminding me. I’ve no idea about that either and from what I’m told it’s quite good so God knows what the holdup is”.

So that’s not a whole lot of information to go on, but come guys, you’ve got fans out here waiting to see this flick. Give us Re-Kill!

We do have the first 6 minutes of Re-Kill below which may have to do us for the foreseeable future.

Another movie that has been delayed is ‘A Man Will Rise’ starring Tony Jaa and Dolph Lundgren; it’s an action film with comedy elements set in 1950′s Thailand. A local gangster terrorizes a town. When a young local man stands up to the gangster the villain brings in a group of foreign hit men who like to dress as cowboys to pacify the town. Ultimately only one man can rise up to bring them down and save the town.

The reason for the delay is apparently due to Jaa’s contractual obligations with Sahamongkol. Remember about 9 months ago that mess about Jaa being threatened with a lawsuit by Sahamongkol? That’s caused all kinds of legal wranglings which may prevent us from seeing the film for a while yet. Jaa isn’t even able to really talk about the film in any capacity as this is an ongoing problem. At least we do still get to see Jaa and Dolph together in Skin Trade next year, which will tide us over until A Man Will Rise gets an official release.

So, two anticipated action movies but no word on when we’ll get to see either; as soon as we know, we’ll let you kids know.