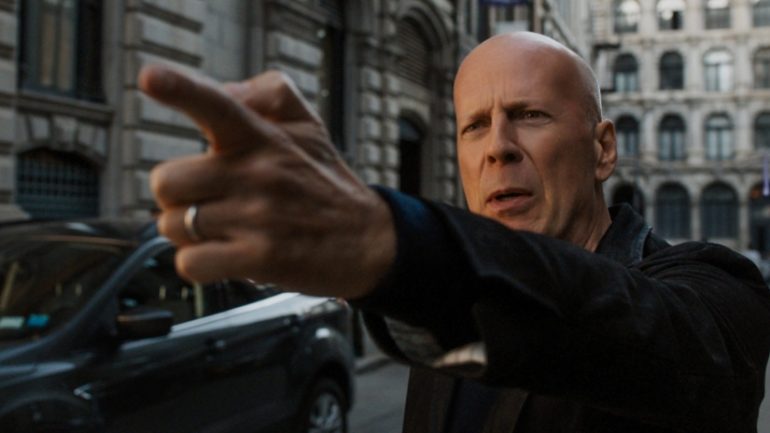 Will You See the New Death Wish?

SYNOPSIS: Dr. Paul Kersey is a surgeon who only sees the aftermath of his city’s violence when it is rushed into his ER — until his wife and college-age daughter are viciously attacked in their suburban home. With the police overloaded with crimes, Paul, burning for revenge, hunts his family’s assailants to deliver justice. As the anonymous slayings of criminals grabs the media’s attention, the city wonders if this deadly avenger is a guardian angel or a grim reaper. Fury and fate collide in the intense action-thriller Death Wish. Paul Kersey becomes a divided person: a man who saves lives, and a man who takes them; a husband and father trying to take care of his family, and a shadowy figure fighting crime; a surgeon extracting bullets from suspects’ bodies, and a man seeking justice that detectives are quickly closing in on.

On March 2nd Bruce Willis takes over from the legendary Charles Bronson in the remake of vigilante classic Death Wish from director Eli Roth. The first trailer was quite bland but I really liked the Grindhouse one (see below) so I think we are at least in for a super-violent and entertaining movie. I’m not entirely sure it’s a remake we necessarily need but the way I see it is the original series will always still be there so I’ll go and enjoy this for what it is and if anything this may encourage people to watch the original.

Bruce Willis hasn’t been able to sell a film as the lead for a while and these days he just looks really bored in everything, mostly taking cameo roles in straight to DVD efforts. Death Wish shows us hints of the old Bruno with him cracking wise while taking out the trash in brutal fashion.

It certainly looks like more of a standard actioner rather than the gritty revenge tale the original movie was; I hope we still get the moral dilemma where we question Kersey’s methods. Is he any better than the people he’s taking out?

It looks like in this one it’s all about Kersey going after the people who attacked his family which is a different angle from the first as he never got the guys who killed his wife. It was a rather nihilistic tale set during the “New York is Hell” period where you felt like you needed a bath after watching. This new movie looks like it has more of a sense of humour which I’m not too sure about yet; it might have just been how the trailers have been edited together. I’d be quite happy if we didn’t get the rape stuff though as it was always my least favourite aspect of the films.

This new Death Wish looks glossier and I doubt it will have the same grit as the original but with Eli Roth at the wheel we can at least expect some fucked up violence.

I’ve read the original Joe Carnahan script and this seems rather different from that too as it had the similar dark tone as the original. So I’ll be there next week to review it and see how this remake plays out but I’ve heard early word that it’s actually pretty decent. The most important question it will you go see it or will you wait for Netflix or ignore it completely?