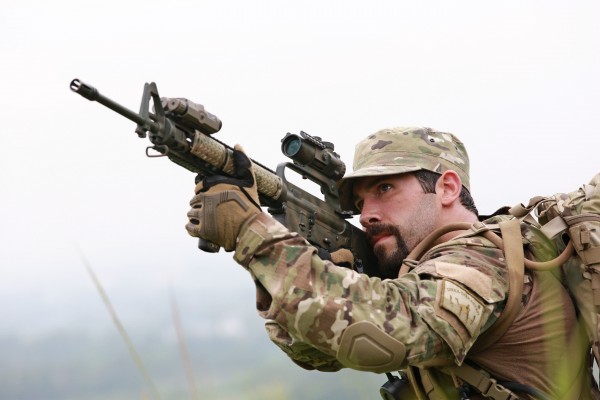 Wolf Warrior is harmless fun but like I said, with all the talent involved I expected something more.

Plot: An Elite Squad of Mercenaries Just Met Their Deadliest Target. Sergeant Leng Feng (Wu Jing), top marksman of the Chinese Special Forces, is jailed under court martial for disobeying orders. But he’s just the kind of fighter the Wolf Warriors are looking for.  Silent. Stealthy. Deadly. The Wolves bring Feng into their pack, honing his skills to a knife’s edge. But another team has Feng on their radar: a group of corrupt blades-for-hire, seeking revenge for the drug lord’s murder.

Review: Wolf Warrior has been one of my most anticipated movies of the 7 year; Scott Adkins and Wu Jing in a movie together? What could possibly go wrong? Actually quite a bit and considering the talent involved I found Wolf Warrior to be rather disappointing.

There is some laughably bad CGI throughout, the worst being the wolves which feels like it belongs in another film. They were pathetically done and the entire scene could have been cut as it added nothing to the story.

Speaking of story, it isn’t exactly hard to follow but to be fair this is all about action; at 90 minutes long it doesn’t let up and is action-packed from beginning to end.

The majority of the set-pieces are well done and the final fight between Adkins and Wu Jing was worth waiting for. Sadly that is the only fight scene in the movie, so if you’re expecting lots of martial arts then you’ll be disappointed.

Adkins doesn’t have much in the way of dialogue and lets his fists and feet do most of the talking but as always he’s an entertaining villain.

Wu Jing is pretty much invincible in this movie as he is shot at, blown up and more but still walks away with barely a scratch. He has some banter with Nan Yu who plays his Commander but she doesn’t have much to do except flirt with him which is a shame as I really liked her in The Expendables 2.

It has an old school action movie feel which I really liked and was even a little cheesy which just made it even better.

Overall, Wolf Warrior is harmless fun but like I said, with all the talent involved I expected something more.