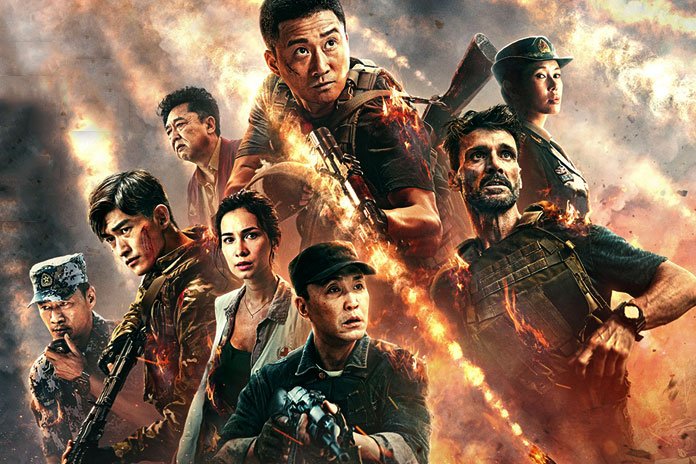 Wolf Warrior II is far superior to the original with some impressive action scenes and one of the most likable heroes of the year in Leng Feng who is rapidly becoming one of my favourite modern action movie characters.

Plot: China’s deadliest special forces operative settles into a quiet life on the sea. When sadistic mercenaries begin targeting nearby civilians, he must leave his newfound peace behind and return to his duties as a soldier and protector.

Review: The first Wolf Warrior was pretty forgettable but the addition of Scott Adkins as the villain was a definite plus; Wu Jing was a sympathetic lead and it also had some fun action scenes. When a sequel was announced I think we were all a bit surprised though due to the first movie not really being all that amazing.

Thankfully, Wolf Warrior II is vastly superior to the original with some huge action sequences and the sheer ambition on display is impressive. It does however, suffer from similar flaws with a little too much noticeable CG  and ropey acting from some supporting cast members which was a little distracting.

Wu Jing returns as Leng Feng, the former Wolf Warrior turned protector of the people who is in Africa and vows to rescue his friend’s mother from a war zone. He is also out for revenge against the villains who killed his lady, which is his real motivation.

Leng Feng is a true blue old-fashioned action hero; he gets beaten up, shot at, stabbed, sick with a potentially terminal disease and yet still manages to take on all opponents with invincible ease. He also has an awesome theme tune which comes on any time he does something cool (which is a lot) and it’s an entertaining throwback to the classic actioners of old.

It’s cheesy at times but I have no problem with that as that’s part of the fun; the best action movies are and that’s why we watch them!

Frank Grillo is on bad guy duties and he’s every bit as hateful as you’d expect; trained in boxing he holds his own in his climactic fight with Wu Jing which is satisfyingly bloody.

Celina Jade plays the love interest for Leng but she doesn’t really get to kick any ass and is there to preserve lives rather than take them… but that’s no fun. Still, she’s suitably strong and is a believable character.

It’s a little too long but it never goes more than a few minutes without a shoot-out or fight scene and the tank sequence is especially awesome.

Overall, Wolf Warrior II is far superior to the original with some impressive action scenes and one of the most likable heroes of the year in Leng Feng who is rapidly becoming one of my favourite modern action movie characters. There is some questionable acting at times by a few supporting cast members and some CG but it doesn’t prevent Wolf Warrior II from being an absolute blast.