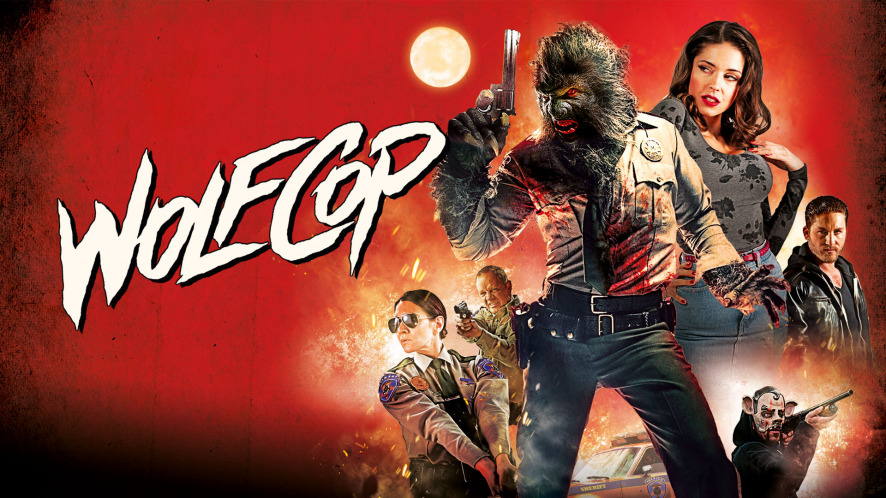 WolfCop isn’t as funny as I would have hoped but for a low budget Canadian feature it gets props for using first rate practical effects with plenty of gore and appealing characters.

Plot: As a series of strange and violent events start happening, an alcoholic policeman realizes that he has been turned into a werewolf as part of a larger plan, so he investigates with the help of his partner and his friend.

Review: As soon as I saw the posters for WolfCop I had pretty high expectations; finally, someone was going to make the perfect throwback to the cheesy, yet awesome movies of the 80s.

So was it any good? Well, I had fun with it and there were plenty of laughs but the poster is definitely the best thing about the movie.

I’ll go over what I liked first: I enjoyed Leo Fafard who plays WolfCop/Lou Garou and the acting in general was better that you’d maybe expect. Lou is an alcoholic half-assed cop who has no real interest in the world; when he becomes a werewolf… he’s still an alcoholic but the booze makes him stronger.

The characters are larger than life and Jonathan Cherry nearly steals the movie as Lou’s “friend” Willie.

There is some great make-up and excellent practical effects which must always be lauded and copious amounts of gore and some nudity too.

The finest moment is when a goon gets his face literally ripped off and you see his skull; that had me in tears and felt like a true 80’s style werewolf flick.

The transformation scene is reminiscent of An American Werewolf in London and the film in general felt like a tip of the hat to that movie and possibly The Howling as well.

I also thought the story tried something a little different and was rather unpredictable too.

My main problem was the tone; when films are trying too hard to be bad and “ironic” then it doesn’t quite work as well. It’s quite funny but not hilarious and it isn’t remotely scary, just ridiculous. I mean, it’s called WolfCop so you’re not coming to watch it because you’re looking for serous art.  It’s a lot of fun and should be watched with plenty of beers… but I just expected more.

I think the upcoming sequel should quell any of the disappointment and ramp up even more gratuitous nudity and gore with a longer running time as well. WolfCop is only 77 minutes long so it’s over just as it gets going really.

Overall, WolfCop isn’t as funny as I would have hoped but for a low budget Canadian feature it gets props for using first rate practical effects with plenty of gore and appealing characters.