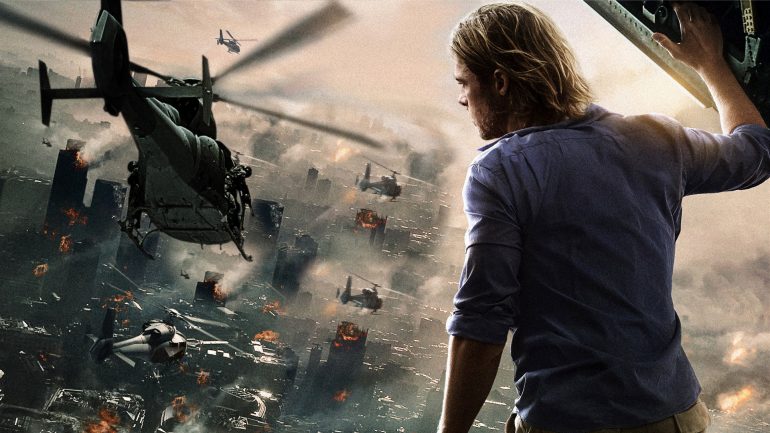 World War Z has an epic sense of scale with some great action and real tension; shame about the predictable ending though.

Plot: United Nations employee Gerry Lane traverses the world in a race against time to stop the Zombie pandemic that is toppling armies and governments, and threatening to destroy humanity itself.

Review: I went into this movie with little to no expectations so imagine my surprise by how awesome the movie turned out. I hadn’t read the book so had no idea what to expect but I have to say that I was wrapped until the very end. World War Z is a visceral nightmare that although it lacked an R Rating, it still managed to be intense and a complete adrenaline rush.

Brad Pitt gives one of his better performances as a man looking for answers and it’s a very restrained role which helps to make it a bit more believable.

I loved the sheer sense of scale and spectacle on display; rather than just seeing America under attack we get to see the whole world in absolute chaos. You really get the feeling that nowhere is safe and that it would be a complete nightmare if something like this were to happen in reality.

The opening scenes (shot in Glasgow) were amazing and I have to say that my hometown was looking rather nice too. It doesn’t waste any time in getting going and I was frankly on the edge of my seat for the first half of the movie.

The tone was just right too where it had the odd moment of humour but not that much as in this situation you aren’t exactly going to be cracking one liners.

I will say that the ending was actually pretty predictable and felt like it was lifted from several other movies but it didn’t really lessen my enjoyment. Zombie movie fans will hate that it has a PG-13 rating but it didn’t really bother me and it wouldn’t have really added anything to it to give it an R Rating.

Although there was CGI, it looked better than I thought and the action scenes were pretty jaw dropping; the plane crash scene was very well executed and confidently directed too. I loved the concept of the aircraft carrier being the only safe place for people and that if Brad didn’t help the government find answers then his family would be booted off.

Marco Beltrami provides a suitable score with orchestral cues and the odd bit of synth, although as any zombie movie fan knows, less is more when it comes to music.

Overall, World War Z has an epic sense of scale with some great action and real tension; shame about the predictable ending though. Definitely worth a watch… if you haven’t read the book.